Igor Kenk as the Bicycle Thief: the graphic novel 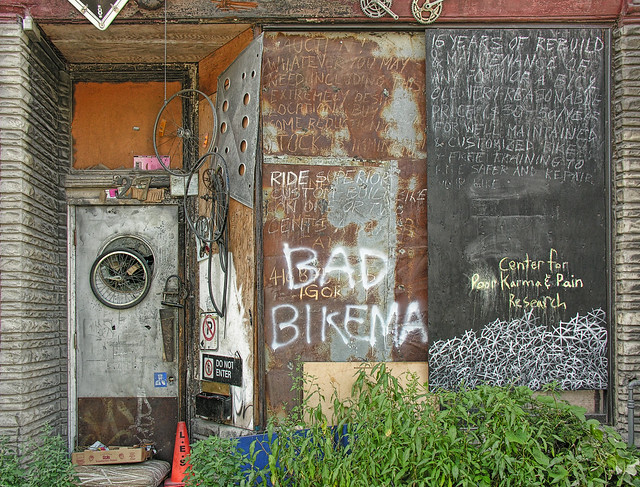 Igor Kenk, major Toronto bike thief and drug dealer, will be the subject of a graphic novel and a documentary by Richard Poplak:

Kenk, owner of the shop Bicycle Clinic, was arrested and charged in July 2008 with theft, attempted theft, possession of stolen property and possession of burglar tools. Later, police displayed nearly 3,000 bikes that were found across the city, hidden in garages, warehouses and homes.

I think they missed out how he was charged with a number of drug charges. Those are the ones that probably made him some money and allowed him to just sit on thousands of bikes, waiting for the apocalypse to arrive.

"If you were a customer you learned pretty quickly that this was a hard capitalist, with some hard socialist, what's mine is yours, what's yours is yours type mentality," Poplak said.

Kenk was born in Yugoslavia, which is now know as Slovenia. Once a police officer, he moved to Toronto in February 1988.

He set up his bicycle shop in 1992 and moved three years later to 927 Queen St. West location where it remained until his arrest.

Customers - and victims - also learned that he was mostly out of his mind, cramming his tiny shop with bikes. One guy told me he had to climb over bikes piled up like they were stairs to get from one end of the shop to the other. I believe one of the more interesting features of Igor, was not just that he was a "capitalist" and a criminal, but that he was also a compulsive hoarder. How else to explain that he accumulated so many bikes with no apparent plan for their disposal or sale other than to wait for an apocalypse presumably far off in the future?

He Ain't Crazy! The Apocalypse is Nigh!

I think this guy was just ahead of the curve... with climate change and its potential for sweeping change to everything else, I wouldn't mind sitting on a big pile of bikes in about 50 years...

Yugoslavia is now known as Slovenia?

If that's the kind of fact checking going on behind the documentary, I'd suggest taking everything else with a grain of salt.

I think sloppy writing rather than fact checking is the problem

I suspect that what was meant was something along the lines of:

"... born in the area of Yugoslovia which subsequently separated and is now known as Slovenia."

I think he's a fascinating

I think he's a fascinating character, I'd like to know more about him and what makes him tick.
I hope they had access to Igor and people he knew.

yeah. and I want to know the life stories ..

of PC Ali Rashid #9497 and why he determined he could conclude a "cyclist struck by a motor vehicle" as something else.
yeah. right.
this cereal box motor vehicle licence giveaway has got to stop.

this bizarre auto badging of traffic officers has to stop.