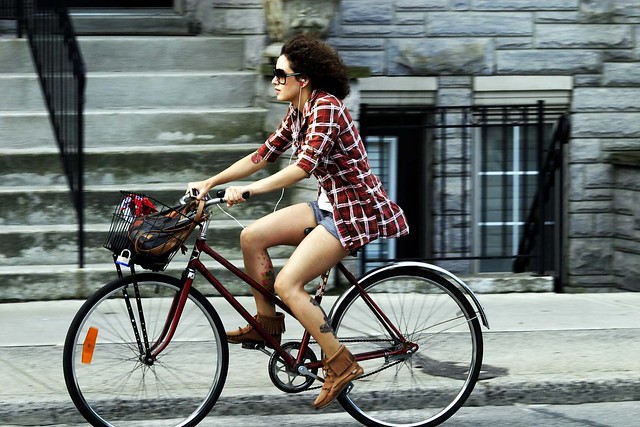 Xander N' Dante, which I assume are two people, are "velographers" at 416cyclestyle. They are creating a Toronto flavour of the blog phenom of bicycle chic that started in Copenhagen. Their mission:

From the multicultural flavored streets of the 416 in TORONTO, we span the neighborhoods and asphalt in search of new aromas and combinations of visual and edible delights. Armed with a crank and a camera we search. Freezing moments in time of the familliar [sic] strangers sharing space and riding by.

From what I've seen over the past few months, their photos are 80% sexy young women and 90% cyclists without helmets, which means I'm essentially barred from being considered "chic" no matter what I wear or what kind of bike I ride.

I Tried Cycle Chic, And Failed

Cycle chic just isn't for me. I know, because I tried it.

what i'd like to see is before and after photos, preferably of cutie pies who have had their pretty faces smashed, accompanied with brain injury, after riding bikes like careless twits. and the boys, too. the gig could be titled "Too Cool for Traffic". oooh, I can smell the Emos creaming in their jeans right now.

this whole idea is wikked. nothing says "chic" like riding inches away from parked cars on Queen west, blasting Kanye West in the MP3-phone earbuds. preventable accident? nah, it's performance art.

Get these people off their bikes and off the streets , they are an embarrassment to Toronto.

I totally understand where you are coming from... some of the people i've photographed on our streets came pretty close to being suicidal... especially on queen street...
there have been some, "after" shots and close calls that i have been witness too.. ( not so pretty)
i'll start posting both sides of the story when i can.

i'm just trying to capture certain moments in time that i find stylish, and working on my photography... i'm not trying to be an advocate for bike lanes or even bike helmets, or even a hound for the environment. However, what i am trying to do is bring awareness that people in toronto actually ride bicycles. even if they ride them like crazed three year olds missing training wheels after happy hour at the cadillac lounge.

it upsets me when i keep hearing people on the radio who commute into Toronto say how they never see bicycles on the streets in Toronto and its stupid that we think we need bike lanes.

but if these "visitors" counted the amount of bike posts and bikes from ronce' to leslieville, or even hung aroung the city after rush hour to grab a beer at any local pub, the suburbian GTAer would see the core of Toronto comes to life with bicycles, scurrying like roaches after the light switches on.

i feel your pain when it comes to cycling saftey and street smarts especially when watching others breaking or obeying basic rules of the road ...it can be embarrasing to see young and naive cyclists trying to emulate what is shown to them in Cycle Safe cities such as Amsterdam and Copenhagen, especially in an environment like Toronto that doesn't yet have the proper infrastructure or mindset to safely support its bike culture... but thats exactly what i find sexy.. the fact that even though we dont have bike lanes and are in competition with streetcar lanes and automobiles, a young woman (or man) in Toronto has the balls to pick up a bike and just go... at her own risk.

hopefully things will change for the better down the road... so that when the careless twits do take to the road of this great city that they either learn to take the safer scenic routes, or we have created a safer environment for them to be careless twits in without endangering themselves or others.

until then i'm off to shoot the beautiful yet careless twit chic that we have in this city...

This discussion of chic reminds me of a metric song

Were the images shot near yonge and invincible?

Salmon spawn one season and then they die. ... The carcasses serve as an important source of nutrients and organic matter which contributes to the health of the watershed. Animals and birds that feast on the carcasses fertilize the forests upslope and the carcasses that remain in the stream are part of the nutrient cycle as well.

All kidding aside, you have some nice photos there. It's good to see that a few cyclists can feel relaxed and un-fearful on Toronto streets.

Toronto chic is certainly more audacious and rare than Copenhagen chic - all the more reason to capture it in action :)

There's a lot of beauty in those snapshots...

It's a wistful reminder on what we have sacrificed for safety's sake in this darn car-dominated world!

I guess passing left on right turning cars is unfashionable to. I have yet to see a cycle chic douche show some real cycling etiquette and pass left (after performing a proper rear check, duh!) on a right turning car instead of clogging up the right hand in order to "drop a shoe" and show off to other cyclists / pedestrians their incomprehensible fashion sense.

Don't judge a book by its cover

I disagree, PPP.
I know plenty of traffic savvy chicks who are also stylish on their bikes.
Yvonne Bambrick isn't a bimbo at all. ;-)

BTW, "etiquette" is a French word.

Sorry just cycling around Toronto a mere 50 hours a week makes me completely ignorant to all the fashionistas flying around like lance armstrong weaving between traffic. Ever since I posted that comment I have been on the look out for someone or anyone that doesn't hug the right continuously, cycles with confidence and fits your definition of "chic". Haven't seen one. The only girl I know that fits your definition of "traffic savy" is the opposite of anything to do with fashion and makes your remark look leotarded (savage love created leotard fyi[NOW Mag FTW!]).

You may know many "traffic savvy chicks", but does that mean there are a cornicopia of them out there? Hell no and they aren't, unless all the amazing fashionista cyclists are around the GTA where I do not cycle 9-5 every day.

In closing not to be elitist but coming from someone that gets their bread / butter and marijuana from cycling (bike courierin') I can say with confidence your white whale fashionista-traffic goddess doesn't exist or atleast not in the numbers you imply.

Sorry to burst your bubble Svend. I know you probably cycle a lot as well and I do not want to take that away from you either.

Congrats on knowing etiquette was french, have a cookie!