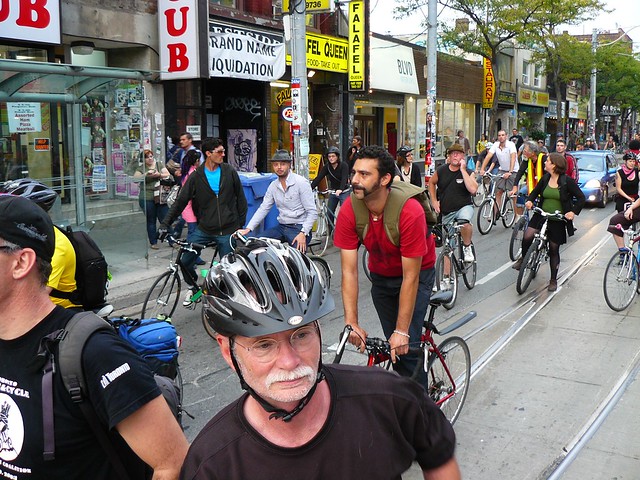 ©View on Flickr
12 years ago ago by Martin Reis.

A recent commenter suggested we think big in regards to cycling infrastructure:

But why not think big? We have a wonderful pedestrian PATH system in Toronto: could we remove a chunk of retail and put in an underground bike highway? Yes, this is literally a pipe dream, I know. I've wondered what's stopping us from raised bicycle infrastructure as well

Though admirably pro-bike, this approach is misguided. It's part of that view that a cyclist is always better off on a trail rather than a street. The problem is that people on bikes need and want to be on major streets as much as drivers do.

I just came back from Calgary where they've installed numerous walkway bridges over the numerous multi-lane highways. This approach assumes that all the ground surface belongs to car traffic and that to deal with pedestrians and cyclists we must install infrastructure above or below ground to accommodate their needs.

This approach makes the actual street unlivable and forces pedestrians to detour far out of their way to find these bridges. It's much easier for a car to detour a kilometre than a pedestrian or cyclist.

We need to take the opposite approach: make our cities more livable, and improve our streets so that the needs of all users are included, what is known as complete streets. What makes many parts of central Toronto popular is that they feel relatively comfortable for pedestrians and cyclists.

If people are interested in this different perspective, I encourage them to sign up for the Complete Streets Forum, April 23, 2010 in Toronto.

I don't agree. I'd much prefer not to share space with cars - they produce exhaust, and are extremely dangerous to cyclists - any shared space will still run some risk of horiffic physical injury caused by mechancial failure or driver inattention.

In addition to mitigating those risks, an underground system also has the potential to offer shelter, making year round cycling more practical for many.

Also, the existence of an underground system wouldn't necessarily prevent cyclists from riding on the road if they chose to do so.

do you even ride a bicycle in toronto? how is it you plan to escape the city smog without leaving the city.

Personally i like the idea of riding my bicycle on a wire 20ft about the road.. Weeeeeeee. UH OH, send in the clowns!

... I commute every day - now do you have something substantive to say, or would you prefer to continue your ad hominem criticism?

Toronto has great cycling infrastructure. The only thing we need to do is get all the cars off of it.

and repair the craters they left behind.

Thinking "Big", I have sometimes wondered what it would be like to have dedicated cycling tubes running both above ground and under, with the added efficiency of a 10-15 kph tail wind generated by solar power. The tubes would extend to the suburbs and would only go subterranean in the city center. They would do wonders to extend the distance people could travel by bike on their commute.

Then I wake up and remain perplexed at the realization that we have yet to create many of the cycling infrastructure best practices already in place around the world.

Sometimes I dream of ivory

Sometimes I dream of ivory towers surrounded by fields of green parks with crisscrossing elevated bicycle expressways... but then I sober up.

It's always hard work to share the same space, but the last thing we need is to depend on transportation engineers, capital funding, and community committees to decide where cyclists want to be able to go and where "cycling infrastructure" should be built.

ad hominem is a pretty big word for a hominid like me.

I was just curious, since you seem quite concerned about exhaust and traffic... which didn't quite add up since you cycle in the big smoke!

I'm disappointed you didn't get my joke about solutions like underground paths and overhead wire ways for cyclists to ride on. The problem is there are few places to escape from the PATH... such exits would be even more limited for people riding bicycles. That is what i've added, another complaint on top of yours!

I love riding outside, and I wouldn't trade that for anything else. I love seeing people, stores, events, automobiles, and all the other action that makes our city great.

Spending hundreds of millions of dollars to dig tunnels for cyclists is completely ludicrous.

I'm back - the commenter who was "thinking big." Thanks for addressing words Herb, it's great to spark discussion. At the risk of doing that again...

Take a look at the link below: the San Sebastian bicycle tunnel in Spain.

A tunnel of that length could get you from Union Station to City Hall, a route that already has two pedestrian tunnels that bypass the six intersection lights above on Bay St. It cost 2.6 million Euros, or one twentieth of the $70 million allocated to the 2009-2013 Toronto Bike Network plan. Hardly “hundreds of millions.”

Why even pursue this? Because countries like the Netherlands and Denmark make it a policy to build dedicated bicycle infrastructure so that the bicycle is the fastest mode of transportation compared to the car for trips under 10 km. You’re never going to push modal share above say 10% if you don’t make this an explicit and aggressive policy. Speed trumps a lot other considerations when people are choosing how to get from point A to point B.

It looks like a really nice tunnel, Bradley. But it's clear from the article that the 2.6 million Euros was spent on fixing up an old railway tunnel rather than making a new tunnel. I don't know of any obvious unused tunnels in Toronto that can be easily and cheaply converted. Even if there were it would be good only for those whose destinations and starts are close to the two entrances.

we likely need both right?

There are always going to be conflicts on the public space of the street between different users who have different speeds, different directions, and different uses ie. the street as a passageway, and the street as a place for hanging out or shopping. (thanks to Alison and David for pointing this out).
So along with more complete streets, we do need bike lanes but we also could use some velotubes for enhanced distance safe speedy travel.
We really need a single, smooth, safe, speedy and straight east-west route from the Parkale/High Park area into the core, but the City has been unable to really begin anything useful, despite maybe 15 years of clear knowledge about the problem, and people like Mr. Pantalone and other NDPers eg. Gord, seem more content with larger projects like the local Front St. road project at c. $60M?? to perhaps "complete the grid" for motorists while ignoring cyclists needs.
So failing the great challenge of painting a white line parallel to a massive subway for near-free capacity and spending more on a study than it would take to do the damned line, why don't we dream of a velotube along College or Queen, or King.... with limited access too.
And if that's impossible, what about getting a lane for bikes on the Gardiner, since we help pay for it though we're not allowed on it. Or a velotube suspended underneath it.
Yes, we have to dream bigger while the City falls apart and can't manage to even put coloured paint on asphalt nor fix obvious safety and other road issues.
We were promised a fix-up of the hazardous curve ahead of the Viaduct and the hazardous curve on the Wellesley eastbound lane to be done last fall, and we're now back into painting season but alack, no success in getting them fixed....

We already have it

Just cycle in PATH. That's almost 30 kilometres worth of routes with numerous connections to the street above. Easy. Safe. Convenient. Luxurious. Exotic.