Parts Unknown, the back alley Kensington bike shop, to close end of July 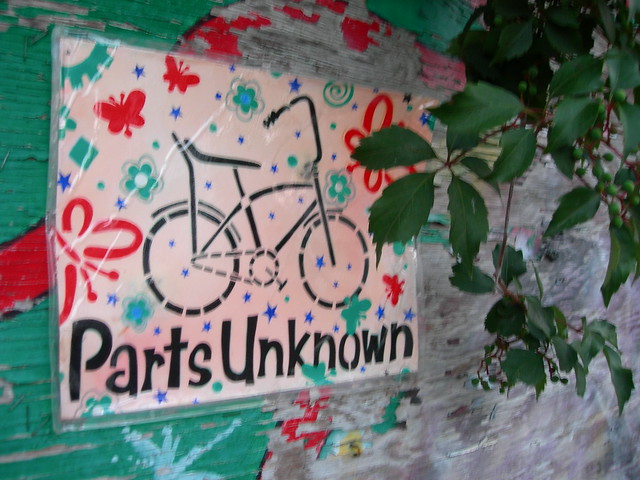 There's a short alley at the end of Baldwin on Augusta, behind Segovia Meats, in the heart of Kensington Market. At the end of this alley is George, the proprietor of the ramshackle bike shop aptly named Parts Unknown. Countless numbers of cyclists, both rich and poor, have gone down this alley to have George fix their bike or get a refurbished bike at a decent price. George is an icon.

Come end of July, however, people will no longer find George there. The landlord of this private alley has given George until then to vacate his large collection of bikes and bike parts.

I had noticed the landlord had begun tightening the screws a few years ago by putting up a gate and limiting the public's access to the shop to certain hours. Now longer did it seem quite as inviting to go down the alley (as inviting as alleys are).

According to Janet Bike Girl, Parts Unknown has been dislocated to make way for a condo development. Janet enjoyed visiting George's shop:

I used to hang out at bicycle shops, and Parts Unknown was always my favorite bicycle hangouts. It is a pretty funky bicycle shop, with lots of great buried bicycle treasures...so worth a visit.

I hear George is weighing his options of finding a new spot for his shop, or moving on to other things. Either way, this is the end of an era.

We wish you the best, George. Thanks for all your wrenching.

George is a great guy and will be missed by the Kensington Market community as well as downtown cyclists.

Best of luck to him.