Ontario may pave shoulders of rural roads - a boon for cyclists, both tourists and locals 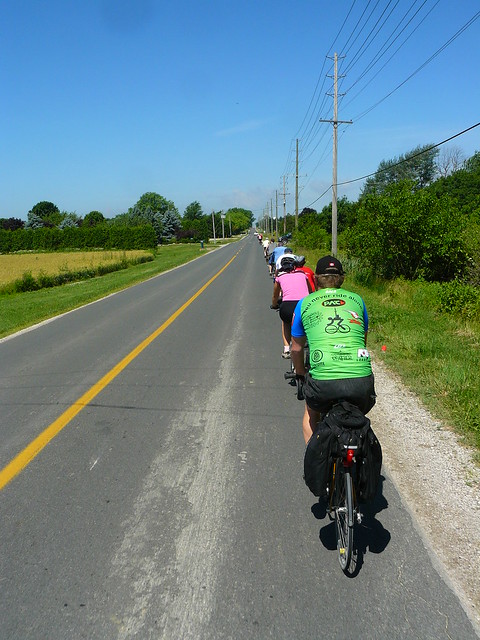 ©View on Flickr
10 years ago ago by Martin Reis.
A private member's bill has been introduced in the provincial legislature calling for Ontario's rural road shoulders to be paved, providing more breathing room for cyclists. If you are like me and have done a fair bit of riding on country roads you'll be quite pleased if this comes to pass, particularly for the busier country roads with painted lines. Paved shoulders can change a nightmare road to something quite bearable. It's unclear how this would mesh with the Highway Traffic Act's requirement that cyclists - and their "vehicles" - remain in the official lanes and not on the shoulder. Will the Act need to be updated to allow cyclists to ride on the shoulder without fear of being ticketed?

Surprisingly the bill was put forth by Norm Miller, Conservative MPP for Parry Sound-Muskoka, and has the support of the Share The Road cycling foundation, an organization started by Eleanor McMahon after her husband, OPP Sgt. Greg Stobbart, was killed while cycling in Milton, Ont., in June 2006.

Meanwhile the Liberal Transportation Minister Kathleen Wynne expressed interest: "We're very interested in this and have already begun to review the policy," she said. "I think he's right about tourism. But there are going to be places in the province where it makes more sense than others. So we're developing criteria."

If I were the Transportation Minister I would start with the busier country roads with painted lines and narrow lanes, and make sure that these roads are those needed to create closed loops for touring cyclists.

According to the article officials in Iowa estimated the cost of paving the shoulders at over $50,000 per 1.6 kilometres of road (which is pretty damn cheap all things considered). Git 'er done.

This is an excellent move for the provincial government and would truly improve safety for recreational cyclists and cycle tour groups.

This could be taken one step further - there are certain routes very popular with weekend riders riding out to the country from Toronto for example Leslie street. It has gotten progressively more dangerous and stressful for cyclists to get out of the city for a ride due to traffic and terrible road quality (potholes, cracks, etc.) Bike lanes along these routes or off-street bikeways, perhaps originating from northern subway stations are badly needed.

Oh God, please pave the shoulders of the trans-canada between sault and thunderbay.

Having even a 1-2 foot shoulder can make such a difference to safety of everybody.

I know it's Ontario law that the shoulder of roads with x vehicles a year must be paved.

I actually wrote the minister a few months back over this very issue, concerning Hwy 6 from the Wiarton area up to Tobermory.

I got back a good response, indicating that after reviewing the matter, they would as part of this year's road work, pave a 1M shoulder on the whole stretch of road.

Overall, I was quite pleased; though I didn't have the heart to write back and say...ummm, 1.5 would have been nicer.

I would advise all that I think think this Minister and the province are receptive, but let's make sure we talk details, 1M is awfully tight.

Just the same, tell them it matters.

The local Conservative (Bill Murdoch) was supportive of bike lanes.

Got a letter from the Min. of Transportation signed by Kathleen Wyne just the other day, in response to a letter I sent in support of the Safe Bicycle Passing amendment.

Regardless of the outcome, it's encouraging to see a commitment on behalf of the Provincial Government to enhance cycling safety.

a reliable map of paved shoulders!

I am too cynical, but cycling in this province has made me so. Killing other cyclists made no difference, but killing a cop made all the difference. This baby step is so obvious it should have happened back at... Confederation.

As for roads out of the city, I agree, but we are all wierdos who don't drive our cars to go do recreational sports, so we 'commies' don't count.

More seriously, I have not even been able to find a reliable map of what few paved shouldered roads there are! I'd like that for a first step from the Ministry, thanks.

You're forgetting that back

You're forgetting that back at Confederation, any roads that were paved had been paved entirely for the benefit of cyclists, so there was no need to pave mere shoulders for us.

In New York State, there are wide paved shoulders that are often bicycle lanes.

New York found it made economic sense. Roads wear out from the edges in. Cyclists put alot less pressure on the edges than do trucks. Therefore roads last longer land need to be paved less often.

I know that if this edict passes that it wouldn't mean that there would immediately be a consistent, safer way to bike between cities, but it's nice to know that at some point in the future there would be.

Maybe we could also petition for signs to be posted at the outside of towns, instructing motorists to respect cyclists using the paved shoulder.

A paved shoulder along all provincial (not-freeway) roads would be a blessing for a first step. Second step would be to add a buffer space (slashed lines?) to protect against the wind washing past the cyclists by big vehicles.

While bicycles along the freeways (400, 401, etc.) are not permitted at the moment, the right-of-way is wide enough to have bicycle paths away from the roadway near the fences of the right-of-way. The only drawback would be bridges or tunnels would have to made, since they would not exist. At least, at present.

The other drawback would be

The other drawback would be the interactions at the on/off-ramps. Cyclists are permitted on controlled access highways out West, and I distinctly remember being a little unnerved by the ramp lanes as I took Hwy 3 through Lethbridge, and also a bit by the Hwy 1/Hwy 3 junction in Medicine Hat. Both of these were considerably lower-traffic expressways than most of what we've got in Ontario (though I wasn't at all unsettled by the controlled access portions of Hwy 17 in Thunder Bay, and was more unsettled by the prospect of backtracking for the better part of an hour in North Bay than I was by just taking the controlled access portion of Hwy 11--yes, both of these legs were illegal). But really, there's almost nothing that anyone could do to convince me to ride along the 401 through Toronto (apart from shut it down to motor traffic).