I set up camp for a few minutes next to the new bike box at St. George and Harbord in order to get a sense of how people are using them. My conclusion: the bike boxes are not different enough from before to make them stand out to drivers and cyclists as bike-only places at red lights.

Watching through a few light cycles it looked like about 50% of the drivers would stay behind the bike box. One of the main reasons for stopping in the bike box was drivers inching forward to make a left turn but hitting a red light. On a busy intersection like Harbord and St. George this happens a lot.

About 1 in 2 cars stopped in the bike box; particularly on St. George. 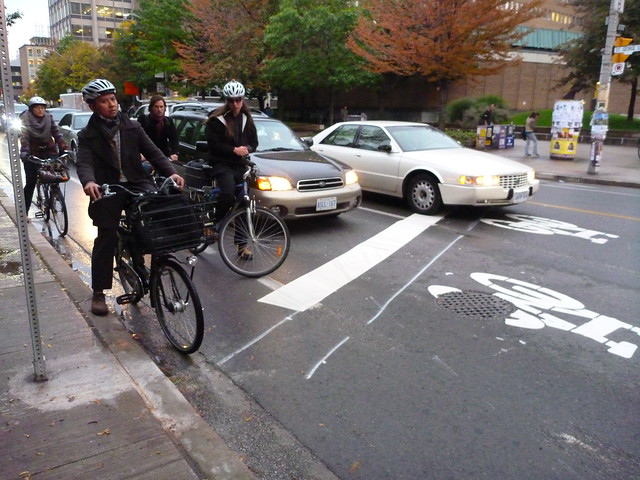 ©View on Flickr
10 years ago ago by Martin Reis.
The confusion is evident in this photo. Not only are the cyclists assuming they have to stay behind the bike box but the cars are actually creeping into the box. Photo by Tino (click on photo to see more). I didn't actually see any cyclists do this, so I'm assuming this is rare. Many cyclists don't like to stick behind the white line (and neither do car drivers).

White van man is first on the

White van man is first on the scene to drive his work van over anything that resembles a cyclist!

Somebody clue those cyclists in!

Portland Oregon has REAL bike boxes, not the wimpy ones in Toronto!

The real needs on Harbord are for continuity - continuity of bike lane at either end, (and the gap to get to Wellesley is like entrapment), continuity within the missing four-block gap between Borden and Spadina that Cnclr Vaughan won't address with bike lanes; and the gap between the stop bars and the bike lanes - they must be made continuous up to the stop bars with white lines to stop the right turning vehicles, or at least give cyclists space at the corners where we need it.
The design confusion is also in choice of locations to some degree. Political confusion is only having these bike boxes go in where a local councillor agrees, and Mr. Vaughan will now say he's doing things for bikes, but not really meaningful ones. There's also implementation confusion as seen in the last pic, where it looks like the painting crews didn't put the stop bar in between the white spraypaint lines.
Oh, colour - for the umpteenth time - why can't we use colour? More world-last practice I guess...

costly paint, as compared to providing for automobility?

I thought/hoped the City would use their normal line and stop bar paint which seems to be closer to latex - but maybe I'm missing some intended irony. Still, like putting down a bike lane at $25,000 a km for repainting, compared to the multi-millions in the bike budget, let alone the cars budget, how can we be so world-last?

Shakespeare made up new words. You're not Shakespeare.

There is no hope for someone who uses emoticons.

There are many cities that use coloured paint for lane markings, but despite one attempt on Strachan a few years ago, Toronto's transportation staff have not ventured toward chromaticity again; the only reminder is a spattering of blue near the intersection with Lakeshore.

Everyone's getting used to it

I tried it out on Friday afternoon. It felt a bit weird moving into position to make a left onto Harbord but the drivers seemed to realize that STOP HERE ON RED SIGNAL means exactly that, even when they move the line. However, I was not going to assume that all drivers were using their eyes and common sense while waiting for the light - indeed, the driver behind me seemed to looking everywhere but in front.

Not sure what colour Seymor is talking about, but the bike lanes on Birmingham St. have a different pavement colour from the rest of the road. It's a reddish colour, compared with the regular asphalt grey. This continues even where the bike lane is to the left of the right-turn lane. Talk about being a "permanent" bike lane!