Bike boxes and sharrows on Harbord 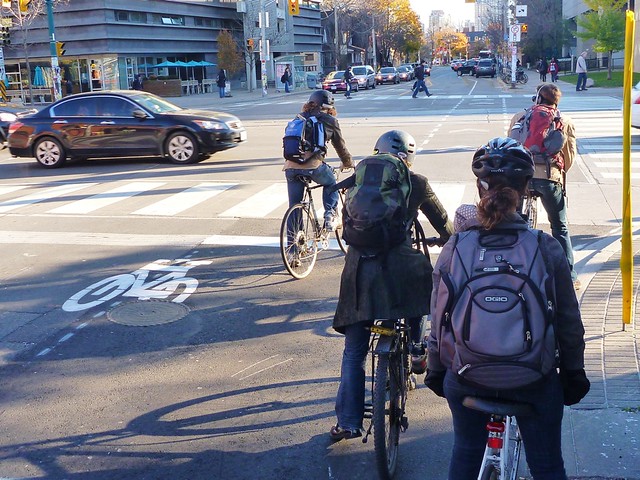 ©View on Flickr
10 years ago ago by Martin Reis.

The rest of the bike boxes and sharrows to fill in the blocks with missing bike lanes have been installed on Harbord. Thanks to Tino for photos. The consensus among some of us: an improvement but inadequate. It all helps, but it would be better to have coloured bike boxes, an advanced green for cyclists, and proper bike lanes instead of a sharrow while still being squeezed between cars.

Pretty cool to see Harbord as

Pretty cool to see Harbord as a bike lane and a standard lane right through the intersection.

Three women wearing helmets and one man not?

Coloured boxes would be great... the lines alone are not a very strong signal to drivers and cyclists.

continuity ahead of bike boxes please...

I will keep saying we need a continuity of facility vs. bike boxes. What's been happening along Harbord is overall an improvement, and it is useful to have the bike lanes being extended to run near the intersections, though that's not a consistent feature. But do we need all these bike boxes? The only one that really makes sense is the one that just went in today at Queen's Park Crescent heading east, where it is helpful to have cyclists get ahead of the cartillery.
And the inconsistent level of facility west of Ossington is appalling. As the curb lane of Harbord didn't need redoing west of Bathurst, that's wasteful.
Yes, colour would be nice.

The St. George boxes were

The St. George boxes were sorely needed as well. The ones at Bathurst are acting as a traffic calming measure. Impatient drivers are less inclined to side-swipe.

I would venture a guess that we don't really know if bike lanes are more important than bike boxes. Given that intersections are prime spot for collisions because of all the crossing traffic, I'd say that bike boxes are very welcome, and probably equally important.

oh you mean an advanced green

oh you mean an advanced green signal for syslists clearly signed so that bone-headed cab drivers coming from the opposite direction seeing the green light shoots ahead and nails you while youre turning left??

Nearby sharrows not well used?

There was a lot of talk about how cyclists didn't know how to use bike boxes when they were first introduced, but in riding on College this afternoon, I noticed that no one knew how to use the sharrows either, since everyone was riding in the typical spot near the curb, rather than taking the lane as the sharrows allow you to do on College with their position in middle of the lane. Maybe regular cyclists on College don't like them for some reason? One downside is that if you follow them, you may end up behind some cars at intersections because it's presumed you won't randomly switch to riding near the curb and then force your way between some cars.

Now I realize that most of the time, those sharrows aren't useful since cars can park on them, but at rush hour I found the right lane to be completely clear of parked cars and the sharrows to be useful.