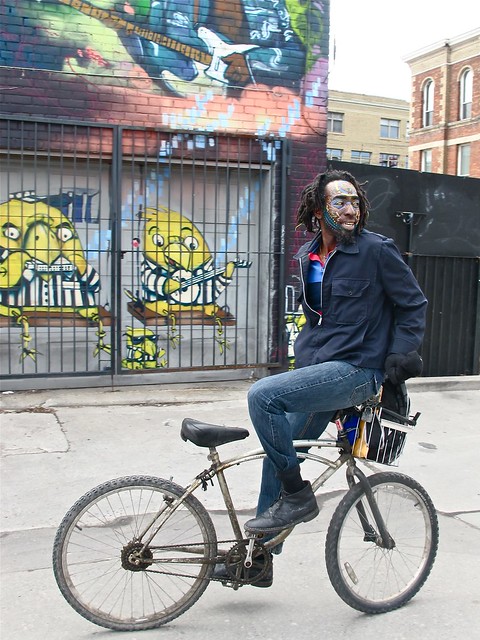 ©View on Flickr
10 years ago ago by 'Xander @416cyclestyle.
Backwards Rider, the hero in one of the films and a capable video-maker himself. Photo by Xander.

The Bicycle Film Festival is coming to town! From August 10-13, the travelling film festival will be staking out ground in the hearts and minds of Toronto bike lovers.

The festival will feature close to 50 bike-related films at the Royal Cinema (College and Clinton) going from Friday to Saturday. Today, Wednesday, features an art show and panel discussion at the Gladstone Hotel (1214 Queen Street West) followed by the Bikes Rock Kickoff Part at the Horseshoe (370 Queen Street West).

Canadian films being shown include Fabric Bike, featuring Toronto's fashionistas The Deadly Nightshades and the bike they make out of fabric.
http://vimeo.com/21904716

Parts Unknown about George who was the popular proprietor of the ramshackle Parts Unknown back-alley bike shop that was forced to close (George is now operating out of a garage in the back alley at Denison and Queen St West). 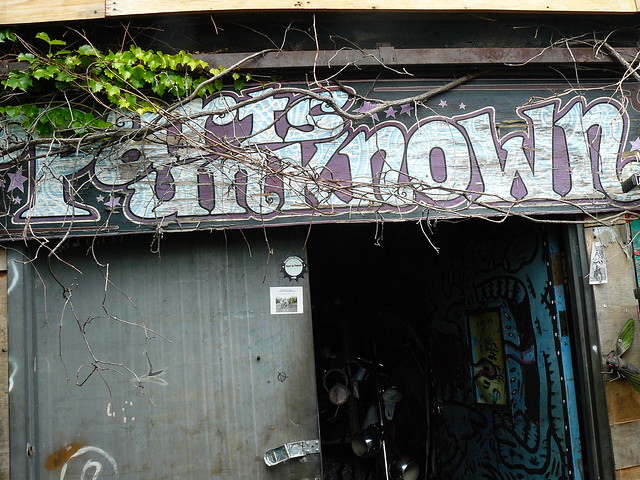 ©View on Flickr
11 years ago ago by Martin Reis.
Photo by Tino.

"This is the view for those who want to join the Backwards riding fraternity."

And, of course, there are plenty of non-Canadian films but you can go check out the program yourself.

I see he is a hero, but from

I see he is a hero, but from my experience this guy is a menace. I seen him jump into traffic causing both cyclists and cars the come to a skid as he decides to wobble his way through traffic to the other side.

Any further info about where

Any further info about where parts unknown is now? There are a lot of alleys around there (I should know, I used to live off one of them).

This festival was very good.

This festival was very good. More people should have been there.

Thanks to those who helped put it on, or make the films.