BixiTO bikes are on the street: launches today. Now we want more 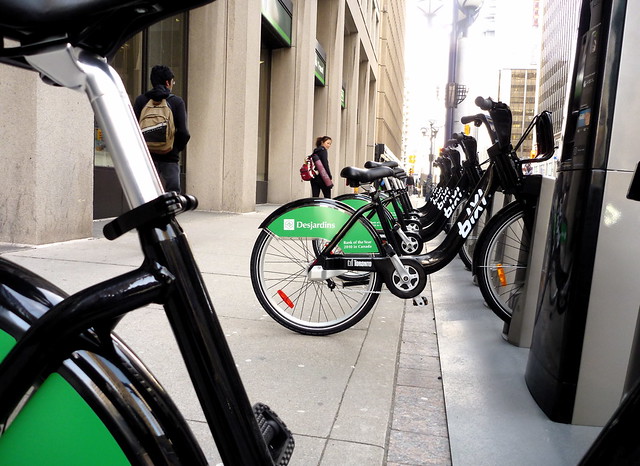 Tino caught early glimpses of the BixiTO bikes yesterday, waiting for the official launch this morning. 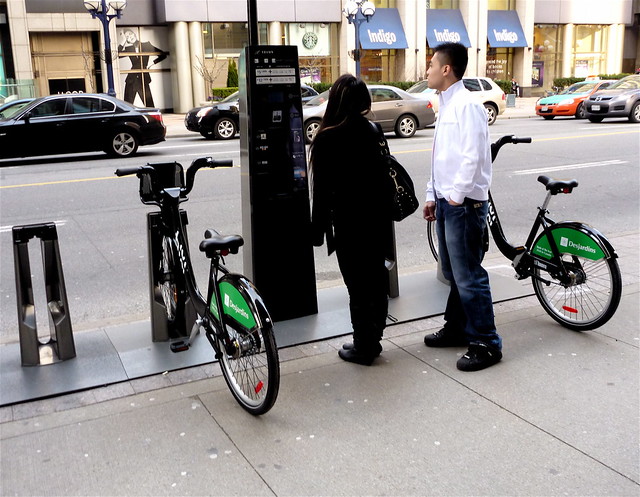 The bikes are turning heads and people are trying to figure out how it works. Will it be popular enough to grow, let alone be sustainable? That's yet to be seen, but every city with Bixi so far has been successful and growing; Toronto is bike-friendly enough that it will likely be successful here as well.

Later today myself, Jonathan Goldsbie, and Gian Carlo Crivello, CEO of Public Bike System Company, will be hosted by the Star's Corey Mintz at his house (as part of his column, Fed, by Corey Mintz. It promises to be a tasty lunch and discussion.

Learning where the stations

Learning where the stations are relative to your destination will be the most cumbersome thing for people to learn i bet... that plus the best route to take.

I have been marking up my TTC

I have been marking up my TTC map with the BIXI locations - it's got a downtown map inset that has got sufficient detail of the streets to be useful. And I haven't got my key yet - doh!

Key came in today's mail, and

Key came in today's mail, and I activated it. It is now the fob on my house keys.

Also included was a printed map of the bike stations. OK.

There are few resources for

There are few resources for finding the stations:

Plus it can just be fun to look at this data mapping of Bixi Toronto (from casa) to find out how busy the system is. You can either see the live data or an animation of the last few days.

Used a BIXI bike today. Some

Used a BIXI bike today. Some observations:
* the maps don't seem to be precise in the location. The Jarvis/TedRogers Way station is a few hundred feet south of Bloor and thus not quite where the map said it would be. I suspect a few others are off their map locations as well. So, just keep looking around in the supposed location's vicinity to find your station....
* I like the bikes - sturdy and functional. But the only models I saw had three-speed gears, and I know that BIXI does have seven-speed models as well. Do I feel a lack of love for us Toronto folks? ;-)
* even for my limited purpose (meet a friend for coffee) the area is awfully small. I understand that BIXI launched a trial balloon and thus the area is small. How soon will we go "real" and have the area covered similar to what was conceived originally???!