Councillor Vaughan had presented his combination of proposed bike routes in Ward 20 over a year ago. These bike routes would provide some key cycling infrastructure in some under-served neighbourhoods (I've drawn the "previously approved" ones above - can anyone point me to documents where they were approved?). There are more in Vaughan's document (which includes proposed in the bike plan and existing bike lanes). The proposed bike lanes would be 1 km on Dan Leckie, 1.4 km on Bremner, and 1.3 km on Blue Jays Way, for a total of 4 km.

These bike lanes would serve the growing downtown condo crowd, expand the network for BIXI riders, provide some key links for visitors and residents to access the waterfront and link up to already approved separated bike lanes. 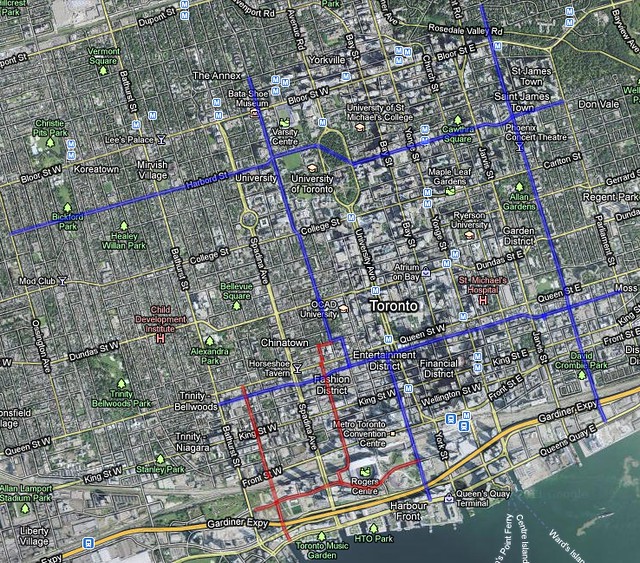 ©Both bike lane proposals
11 years ago ago at , Toronto, Ontario, Canada by IBikeTO.

The separated bike lanes includes 5 km on Harbord to Wellesley, 3.5 km on Richmond, 2.5 km St. George / Beverley, 1 km on Simcoe, and 3.5 km on Sherbourne. Including Vaughan's "approved" bike lanes above that comes to about 20 km.

I think it's helpful for cyclists to get behind Vaughan's proposals for Ward 20. Other than our disagreement over the need for bike lanes on John, Councillor Vaughan has had good proposals. Portland will link up with future bike lanes on Richmond and/or Adelaide; Peter will link Beverley to Richmond/Adelaide; and extending Simcoe bike lanes will provide better access into downtown while crossing the separated bike lanes (once they're built).

All right, the councillors

All right, the councillors go for tokenism because they have neither the courage nor the vision to implement a proper cycling infrastucture in TO.
But why are cyclists satisfied with whining, cap in hand, and crumbs offered by City Hall for the past two decades? Answers, please.

These bike lanes along

These bike lanes along Bremner and LIberty were promised by Dan Egan years ago and never happened ...

I am not sure how they will

I am not sure how they will be able to fit bike lanes in on Liberty Streetnow. Essentially Liberty is car parking all the way along. The TTC has trouble getting the ossington bus through.

The time to have done it was when they were building it all. That area went from old factories and a jail to what we see today. All the roads had to be put in, it would have been easy to do then. Now it will be difficult and politically risky for the Councillor.

That is something we should be advocating for. When a brand new road is being built, it should automatically be planned to Complete Street standards. That would include proper accomodations for bikes and make the area much more liveable.