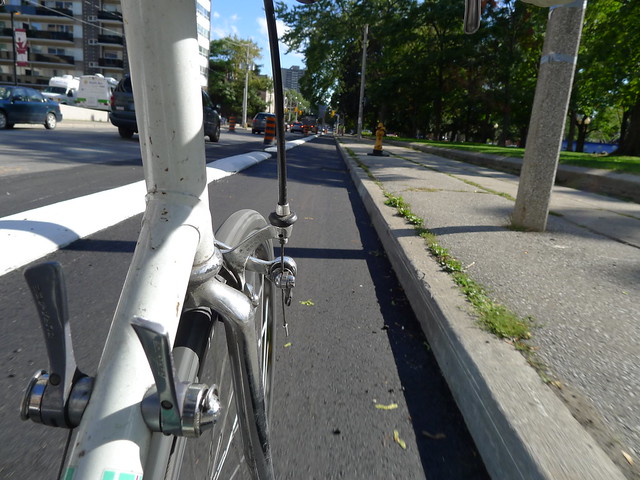 The Sherbourne cycle track (aka separated bike lanes) is one step closer to being completed. Tino has photos for us of the first section close to completion.

From the pictures, we get a

From the pictures, we get a bit wider lane, but not generously wide.

There's a curb which will make it tough for one bicycle to pass another. (All those 'presently not riding but will immediately ride in a "safe place"' riders aren't going to be moving quickly.)

It looks like there's no special treatment at intersections; the track simply ends ahead of the intersection. It will be interesting to see what sort of signage will be put up and how it will work.

The biggest danger I see when riding in a curbside lane (separated or not) is being right-hooked at intersections. In my experience, the only two safe maneouvres is either cut left around the right-turning car, or wait behind the car until it turns. While "safe place to ride" cyclists won't be going around the left, the berm now prevents experienced cyclists from doing so as well.

Hopefully the "safe place to ride" riders will know to deal with right-turning cars.

Sherbourne has long blocks so there aren't too many intersections. It's going to be more of a problem on Wellesley/Harbord.

Yes, separated and safe is

Yes, separated and safe is the only solution. The compromised and self-delusion of the possibility of Share the Road concept is just that: self delusion and dangerous.

Read the article in the Star:
http://www.wheels.ca/news/carte-blanche-pottery-roads-death-trap/

to get an idea what it means sharing the road. It means it is irresponsible for cyclists to promote such impossible dream considering the drivers' attitude, and furthermore it gives politicians an excuse not to do anything about cycling infrastructure.

The author whose work you

The author whose work you promote here has repeatedly claimed that cyclists have no place in Toronto, anywhere. If motorists have a sense of entitlement and reject any sense of accountability, I would say that the body of work you quote from has done a lot to make the problem worse. Dedicated cycling infrastructure has an important part to play, particularly encouraging cyclists would otherwise feel to frightened to get out on the roads. Until the cycling network extends from everyone's door to their destination, however, most of us will have to share at least some of the the roads.

I have forty years riding on Canadian roads. I consider myself a pretty competent road cyclist. And I fight hard for infrastructure, both painted and separated, every time a proposal for building more comes up. I recommend this to my fellow cyclists: promote cycling safety in every circumstance: on the road, on the path, on the trail. Because wee need the infrastructure, and we need to change the entitled attitudes of too many motor vehicle operators, and even more, I believe, we need to understand that we can't accomplish one without the other. We need to stop dividing the cycling community.

Yes, separated and safe is

Yes, separated and safe is the only solution. The compromised and self-delusion of the possibility of Share the Road concept is just that: self delusion and dangerous.

This sounds catchy, but is pretty meaningless.

I guess for you there can be no solutions for the central city, because there is no way you'll get truly separated (there are still intersections and driveways). And safe, well, I don't know what your definition of safe is, but until all motor vehicles, all pedestrians, and all other cyclists are removed from the picture, bicycling isn't going to be completely safe--separated lane or not.

If the argument is for "safer" cycling infrastructure, I think we can all agree. Probably where we disagree is whethert the only way to make things safer is to separate. It isn't, and separate isn't necessarily safe, as any ride on the Martin Goodman Trail on a summer afternoon will demonstrate.

I also like the jump from "share the road" to "separated". Painted bicycle lanes are neither of these. If I had to guess, you'd label them as "unsafe". The interesting thing is that the "separated" lanes on Sherbourne, as far as I can judge, share the major "unsafeness" of painted lanes: what happens at intersections?

If building building better infrastructure results in more people cycling, then the general rule is that roads become safer for bikes.

If we fail to recognize this specific benefit of closing the ratio between cars and bikes, do we then run the risk of furthering an attitude of reliance on painted lines and bollards?

If the Sherbourne lane ever

If the Sherbourne lane ever gets even half as busy as the College lane, that's going to be a horrible route. Sometimes I just ride, but if I'm commuting and need to get somewhere in a timely fashion, I would not want to be locked into a narrow path behind a pack of slow cyclists.

And seconding Ed on the problems at intersections. If novice cyclists do come out and use this lane because of the illusion of safety an intermittent barrier gives them, there's a very good chance that they will be coming to some kind of grief at intersections from right hooks. Few will have the experience or confidence to do the right thing and move behind a car. They may even think it's illegal to do so because the city put in a special little lane for them.

This looks like a half-assed solution that does not begin to compare to Dutch infrastructure. I'd rather stay alert and ride in a standard bike lane, a sharrow or an unmarked curb lane than use this cattle chute.

I walked Sherbourne from

I walked Sherbourne from Shuter to Bloor. Summary:

As far as I can see, there's very little commitment to making this lane work, or to make it an example of good bicycle infrastructure.

The level of imagination and committment here is "let's replace a painted line by a concrete hump". I
If there's broken glass or ice in the lane, it will take careful riding to cross the curb to avoid it (assuming there aren't bollards placed to make it even more of a challenge). With the catchbasins in place, we have essentially an under-one-metre-wide piece of pavement.

Mind you, the separation appears great for BMX riders. One young guy was zig-zagging from one side of the hump to the other, by bunny-hopping up on it, riding a bit, bunny-hopping off, etc. I'm glad someone is getting enjoyment from this.