Mind the bike lane gap: the joys and annoyances of London cycling 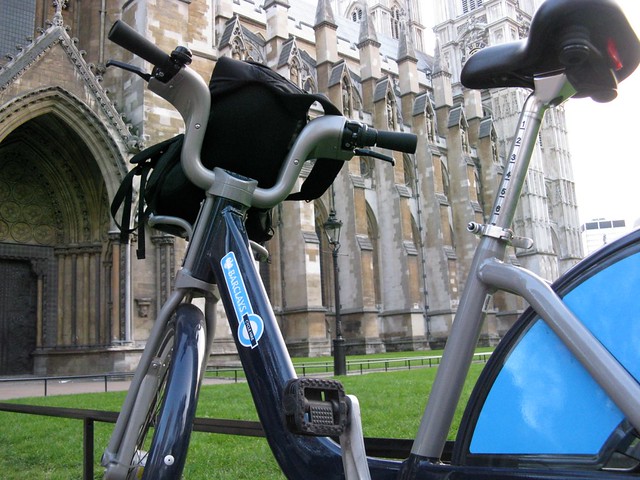 ©Boris bike in front of Westminster Abbey
10 years ago ago by IBikeTO.
I'm back! On my return from the land of the Dutch, I had a short stop in London. I immediately took the tube down to Piccadilly Circus, dropped off my stuff at the hostel only steps from the station, and promptly wandered around until I found a "Boris bike" (nicknamed after Mayor Boris, a regular cyclist himself) at a Barclays Cycle Hire rack. For £1 I got 24 hours of access to any of the bikes in the system. There's no better way to see as much as London in as short a time as possible. If you don't already know how this particular system works, Transport for London provides an excellent video: 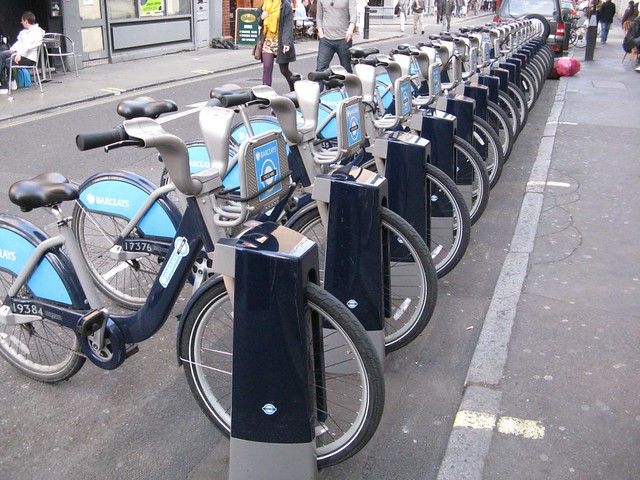 ©Boris Bikes
10 years ago ago by IBikeTO.
The cycle hire bikes, proudly waiting to be used. 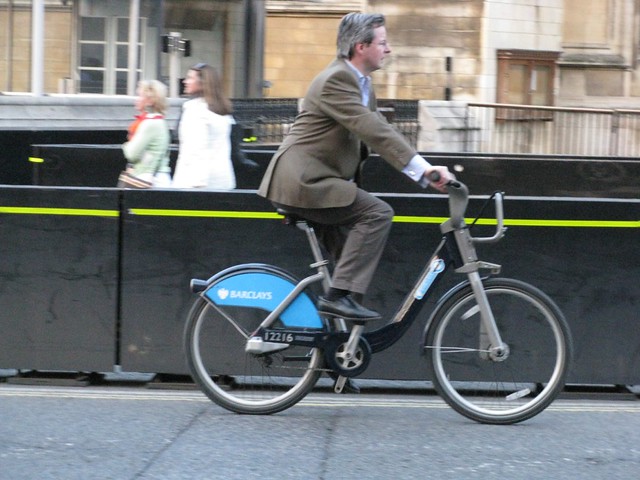 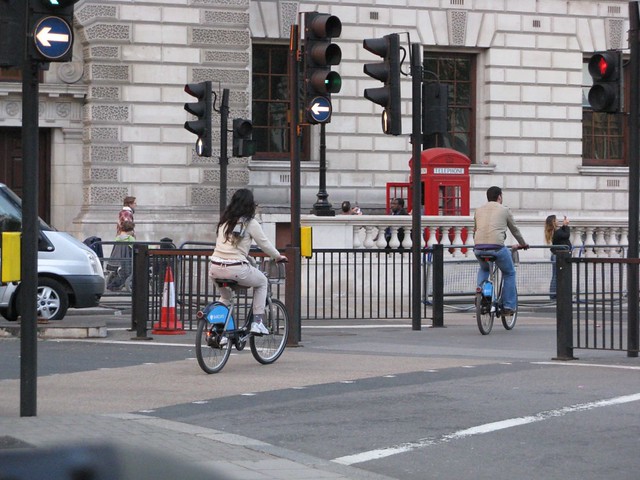 ©Tourists on Boris bikes
10 years ago ago by IBikeTO.
Tourists? It's hard to look up at buildings and pay attention to speeding traffic at the same time. 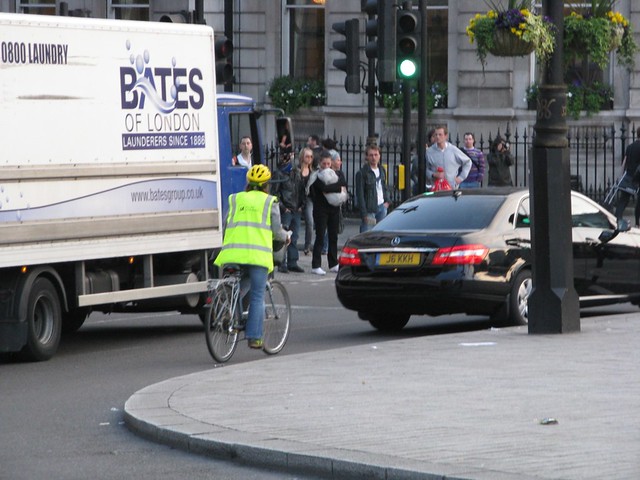 ©Wary London Cyclist
10 years ago ago by IBikeTO.
Fully prepared to do battle with large white vans. 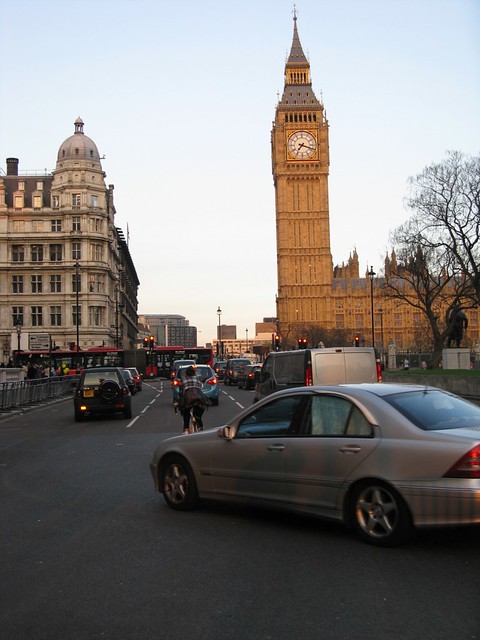 ©Cyclist in traffic
10 years ago ago by IBikeTO.
Road warrior takes the middle lane.

In my short time there I observed a sharp distinction between the cyclists on their own bikes and those on the Boris bikes. Bright reflective, yellow jackets and vests were wide spread, helmets less so. The Boris bikers were more likely to be just wearing regular clothes, no helmets, and use the sidewalk for short distances (at least the tourists).

This was jarring having just come back from the Netherlands where I don't recall seeing anyone in a reflective anything and very few people wore helmets. But then the Dutch didn't have daily uncomfortable encounters with large buses and other vehicles zipping closely by them in narrow bike lanes. And when they do, motorists always give the right of way to cyclists. I don't think it's clear how much of a difference the reflective jackets make, but I could see how local cyclists were searching for some way to increase their comfort in the absence of good bike lanes. To the average Londoner these cyclists probably appear to be a special breed of brave souls. 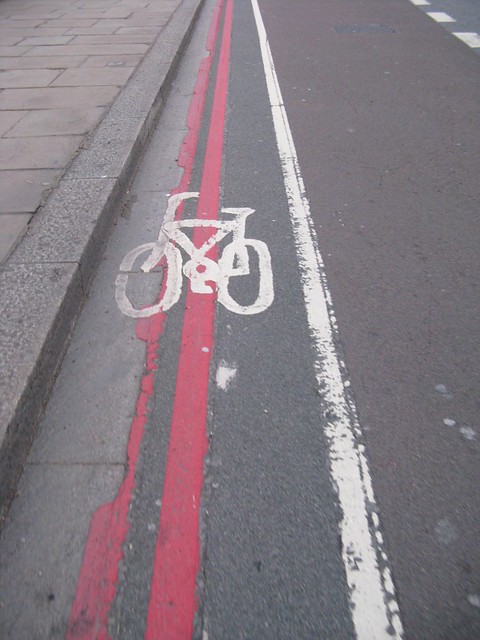 I was happy to just be able to see London on bike, though I noticed how things still need to improve. London's bikesharing scheme has made cycling appear much more approachable for the average person, and it has made a start with its cycling "superhighways", though it has much room for improvement. Both London and Toronto have a long way to go to reach the level of cycling-friendly Dutch cities, where even the smallest towns have good cycling infrastructure. Toronto already has a higher bike mode share in the core, but with London's quite pro-cycling Mayor, it may soon surpass Toronto. The one thing holding London back is the apparent aversion to separated bike lanes even on their cycle superhighways, and the preference by local officials for cycle training over good cycling infrastructure. This will still keep a lot of the less warrior-types off bikes.

Stay tuned as I go further back in time to cover that below-sea level place they call the Low Countries.

Herb, I know Toronto and

Herb, I know Toronto and London have weak infrastructure.

But I was curious how "comfortable" you were riding in London compared to riding in Toronto? Did you find it to be a similar experience? I haven't been to London, but if it's anything like New York, Toronto is much more calm and comfortable.

I've been to Hong Kong too, but I don't even remember seeing anybody on a bicycle in Hong Kong, so London can't be as bad as Hong Kong - despite its British influence.

I found it exhilarating,

I found it exhilarating, particularly after the Netherlands. I had to remind myself to ride on the left and tried to make sure that cyclists were allowed. Overall, I would say that it wasn't as comfortable as Toronto since it appeared that more roads in the London core were built for fast motoring than in Toronto.

I found their bike lanes very odd - so very narrow and every symbol hand-painted. The width provided next to no comfort and encouraged vehicles to pass closely. Though when I was on streets with no bike lanes but had a bus route I felt I got passed with lots of room by the buses and taxis. I think many faster roads in London have the width for buffered bike lanes but the planners just figured cyclists only needed 2 feet or so.

That said there are lots of windy, small roads so if someone knew London well enough they may find a comfortable route. Many cyclists still choose the main roads and just endure riding fast with motorists.

London has a few things going for it: very little freeze/thaw so the roads aren't riddled with potholes and road cuts; a government with a message that cyclists belong; and an extensive and growing bikesharing program that make it easy to try cycling.

Road cuts aren't a product of

Road cuts aren't a product of freeze/thaw but necessary for underground utility maintenance. The sloppy patching of road cuts which detracts from the quality of the road surfaces in Toronto isn't excusable.

Herb, do you know the reason

Herb, do you know the reason the the red striping? Those yellow pylons seem dangerous, like you might snag a pedal on one and out into traffic you go, i hope they're covering up something even more dangerous - but, i doubt it!

dances_with_traffic the double red line means no stopping at any time and those painted lines most likely existed before the narrow bicycle lane was added. http://en.wikipedia.org/wiki/Red_route

I'm wondering if Ford still plans on painting every single curb in Toronto to "make parking easier to understand"?

He is going to paint the

He is going to paint the curbs? Ford must think we're really idiots. Though he may have a cause for such an idea. I am still laughing about him handing over the city's very lucrative garbage business to some "businessmen" aka the mob. Pretty soon the trashy Toronto will be back and you'll be fighting with the "company" over the latest billing increase for garbage or bungled payment. Oi.