They're likely safer and much more comfortable: the research behind separated bike lanes 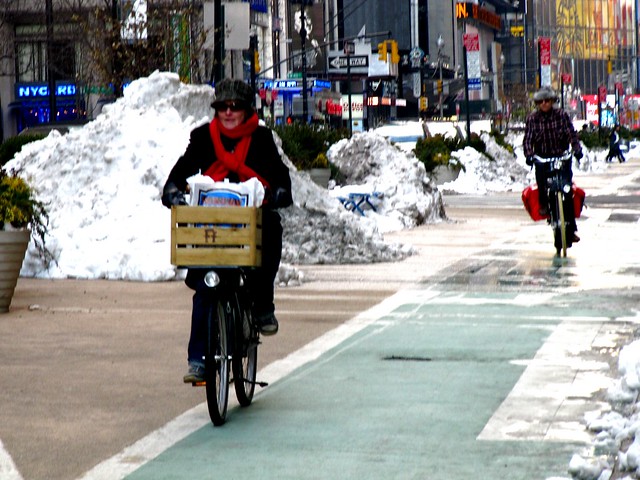 In North America and the UK bike lanes and cycle tracks (separated bike lanes) have a history of being controversial, though less so now, thanks in part to more experience with installation and better research. In the rest of Europe they have been more or less a non-issue. Some countries like The Netherlands and Denmark have a long history of cycle tracks. In North America motorists tend to swing on either side of the issue: many motorists refuse to give up any asphalt for bike lanes, or even sidewalks. Other motorists just can't conceive of dealing with bikes in front or alongside them so hope for some separation. A minority of cyclists (who've usually called themselves vehicular cyclists) have adamantly opposed to most bike infrastructure. Their primary reason for opposing is that in the past municipalities have created particularly poor bike paths and have legislated cyclists to use them. Some of their concerns of the dangers are warranted but appear to apply mostly to poor implementations. New research has shown that cycle tracks may in fact reduce the risk of injury over either the road or the sidewalk. Most everyone else on bike likes the idea of getting some dedicated space, and won't really feel comfortable unless they have some separation where car speeds are high, or other calming measures where our society is willing to allow limitations on motorists.

The research on separated bike lanes as increased recently where Canada and the US cities are finally getting more serious in studies on the benefits and drawbacks and the contributions to safety or increased risk. The Cycling in Cities program at UBC is doing some exciting research on injuries - you can find a summary of their preliminary research (which shows a surprisingly high number of people injured from streetcar tracks, partly because of cars forcing cyclists into the tracks). But their original research won't be completed and made public for some time yet. In the meanwhile we can consult their 2009 scientific literature review of bicycle infrastructure, The impact of transportation infrastructure on bicycling injuries and crashes: a review of the literature by Conor Reynolds et al.

Reynolds et al. were surprised by a general lack of scientific studies on bike infrastructure. One reason for this, they found was that "it may be straightforward to count the injuries that occur on different route types (numerator data), but it is more difficult to gather data on the number of cyclists who use various route types (the denominator data needed to calculate the risk)." Their report reviewed all the English language scientific literature that examined how the basic facilities for transportation affect the risk of injury to bicyclists. There was a lot of variation in the literature, but also a lot of lumping together types of infrastructure that may have different risk factors. For instance, off-road paths were lumped together, whether paved or unpaved, bicycle-only or multi-use.

On-street bike lanes, they found, reduced risk of injury by about 50% compared to unmodified roadways. When looking at off-road facilities, it was less clear from the literature. They found two studies examined off-road bike paths and found reduced risks, lower than the risk of cycling on minor roads. Two studies that grouped paved and unpaved, bicycle only and multi-use urban trails in their off-road path category found higher risks than riding on-road. The interesting thing is that the studies that looked at unpaved off-road trails separately from on-road cycling and separate from bike routes, lanes and paths found risks of injury higher than on-road cycling but also higher than bike routes, lanes, or paths. Clearly there needs to be better differentiation among the types of off-road infrastructure. The authors noted that there were no English-only studies on cycle tracks (at least at the time of writing in 2009).

Most of the studies found sidewalk cycling to be riskier, though one of them found cycling against traffic on the sidewalk accounted for most of the increased risk. (I wonder if such elevated risk also exists for children riding on the sidewalk, and if so, why do we still insist that sidewalks are safe for kids but dangerous for adults?)

Reynolds et al. concluded that "purpose-built bicycle-only facilities have the lowest risk of crashes and injuries", from what they could discover from their review. They found bike-only facilities had lower risk than cycling on-road with traffic as well as off-road with pedestrians on sidewalks or multi-use paths. The highest risk of crashes and injuries were found to be on sidewalks and unpaved off-road trails. This suggests that cycle tracks/ separated bike lanes are well situated being bicycle-specific infrastructure that is on-road though separate.

From there we look towards Montreal, where we're lucky to have the first comparative study of crashes and injuries in cycle tracks in North American was conducted by Anne C. Lusk et al, titled Risk of injury for bicycling on cycle tracks versus in the street. The study compared the motor vehicle/bicycle crashes and injuries on six Montreal cycle tracks (physically separated bicycle-exclusive paths along roads) with comparable reference streets (a parallel street with approximately the same intersection frequency and cross traffic). The authors found 2.5 times as many cyclists road on the cycle tracks compared to the reference streets. They also found that the relative risk of injury was lower on a cycle track than on the comparable reference street (the average being 0.72 the relative risk). They concluded that "[c]ycle tracks lessen, or at least do not increase, crash and injury rates compared to bicycling in the street". This is a great boon particularly since the cycle tracks attract so many more cyclists than adjacent streets.

The NYC Department of Transportation found equally happy results with their pilot Prospect Park Bike Path and Traffic Calming project. NYC created a 2-way bicycle path with a three foot parking lane buffer and the removed one lanes from motor vehicles. They found that weekday cycling traffic tripled after the implementation; cyclists riding on the sidewalk fell to 3% from 46% (the count included children who are legally allowed to ride on the sidewalk); speeding dropped from 74% to 20% of all vehicles; crashes for all road users were down 16% and injuries to all road users were down 21%.

A European study, Road safety and perceived risk of cycle facilities in Copenhagen by S.U. Jensen, corroborates some of these conclusions. The study was undertaken into the safety of Copenhagen cycle tracks and found that their construction resulted in an increase in cycle traffic of 18-20% and a decline in car traffic of 9-10%, contributing to an increase in cycle usage along those routes. On those same reconstructed routes accidents and injuries increased by 9-10% (the increase of accidents and injuries increased at intersections while decreased mid-block).

It may appear, at a glance, as if overall the cycle tracks actually decrease safety, and cycle track opponents have jumped upon this study as supporting their view that they're dangerous (John Forrester, father of Vehicular Cycling, being perhaps the most famous opponent). Jason, a blogger at Bike Friendly Oak Cliff (from what I can tell it's a suburb of Dallas) contacted Dr. Lon D. Roberts and the author of the report for some elaboration. (This blog site does more research than all the editorial pages in Toronto newspapers combined!) From the perspective of an individual cyclist, Dr. Lon D. Roberts told Jason, the Copenhagen shows that the "likelihood an individual bicyclist will experience an accident goes down as the number of bicycle riders go up". Even though injuries and accidents are increasing, they are increases more slowly than total cycle traffic on the routes. For the individual cyclist, therefore, there is less risk.

Here's a longer quote by Dr. Roberts that may help elaborate:

It may be accurate that my choice of studies isn't comprehensive (but then the Cycling in Cities review does that work for us), but it at least demonstrates the there is scientific evidence pointing towards the increased safety of certain types of separated bike lanes. So long as any new ones learn their lessons from the failures of others. The most revision, it appears, has been done at the intersection. The American planning firm, Alta Planning, has incorporated these changes into its new guidelines for cycle tracks. They recommend cycle tracks drop to be bike lanes at major intersections with clear markings through the intersection. The parking and barrier stops near intersections so the cyclists are more visible to crossing traffic. The stop line is moved back so cyclists can wait ahead of cars (called a bike box here). thus helping to mitigate some common collisions. The NYC cycle tracks follow the same philosophy.

There's no need, however, to convince the Citizens for Safe Cycling organization in Ottawa. They are asking city councillors to accept the proposal for a separated bike lane on Laurier:

"Any change requires a period of adjustment, but separate bike lanes have been shown to increase the number of cyclists while decreasing the number of accidents per capita," Moor says. "Better cycling infrastructure has also been shown to decrease traffic congestion and to boost business for local shops.

"By creating a greater sense of security for cyclists, we will encourage more people to cycle to work, to school or to the store. That's good for our health, it's good for overall traffic flow, and it's good for local businesses."

An English-language-only review of bicycle safety literature? How droll. Isn't there anyone at their university who speaks Dutch?

... he said, inadvertently using a word borrowed from Dutch.

Many research institutions in the Netherlands, such as http://www.crow.nl/english (cited in the review) publish much of their literature in English, as does their ministry of transport.

The Harvard study of

The Harvard study of segregated cycle paths suggests they are much safer than the road. Toronto should embrace this model north american city. We copied their Bixi so why not their segregated path network.