Traffic congestion is not increasing in central Toronto: it's a suburban problem

The Mayor has jumped onto the traffic congestion crisis bandwagon: "Toronto’s economy loses billions of dollars every year from gridlock and traffic congestion. We need to make the situation better – not worse." (for example, by adding another car lane to Jarvis). Councillor Parker at least seems to understand the issue by recognizing that we "cannot grow enough roads to accommodate every new resident in a private car; alternative means of mobility will be required" but still figures that we have to be "fair" by making "the most of the motor vehicle carrying capacity that our roads can provide". Presumably this means in order to be "fair" to car drivers Parker would have to oppose any proposal that takes away an existing car lane.

Even though facts never get in the way of the mayor having his way, we can at least investigate this further into this congestion thing. Fact one: traffic into and out of the core has been virtually stable. In-bound vehicles (excluding bicycles) has hovered around 100,000 vehicles and in-bound person trips have hovered around 300,000 during the peak travel time of 7am to 10am between 1985 and 2006. Traffic congestion may be getting worse in other parts of Toronto - the number of in-bound and out-bound trips has increased for city's boundary, but we shouldn't confuse the rest of Toronto with Toronto's Central Area. 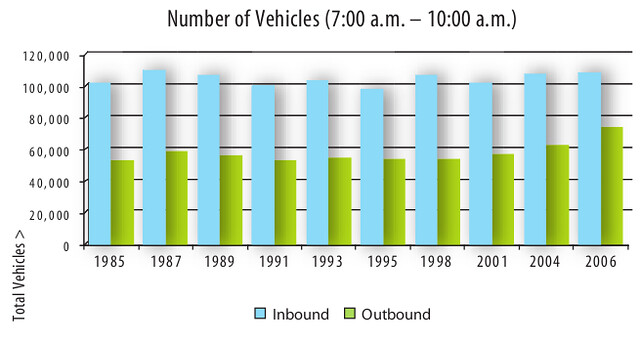 ©Number of vehicles entering/leaving Toronto's central area
11 years ago ago by IBikeTO.
Number vehicle trips are stable in and out of Toronto's Central Area. 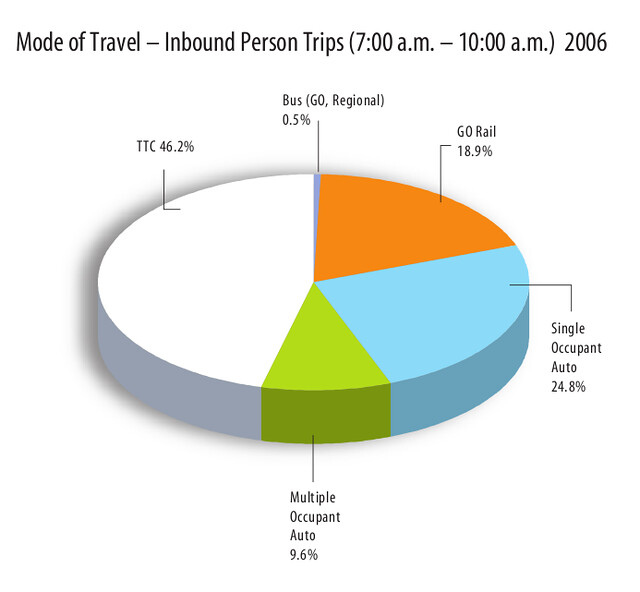 ©Mode of travel at border of Toronto's central area
11 years ago ago by IBikeTO.
Travel mode into and out of Toronto's Central Area.

The City of Toronto has been conducting semi-regular cordon counts of traffic; the last one href="http://www.toronto.ca/planning/pdf/cordon_count_2006.pdf">in 2006 counted automobiles, TTC and GO Transit. A cordon count is where they count all the vehicles and persons travelling in and out of the boundaries of an area, in this case they have a cordon that is the boundary of the City of Toronto as well as one for the Central Area.

At the borders of the city (the other cordon count they conducted over the years), the traffic mix is entirely different from the Central Area. Instead of having a stable number of vehicles entering and exiting the city, both have been increasing dramatically. In-bound traffic has jumped from 175,000 to about 300,000 from 6:30am to 9:30am, almost doubling in volume! 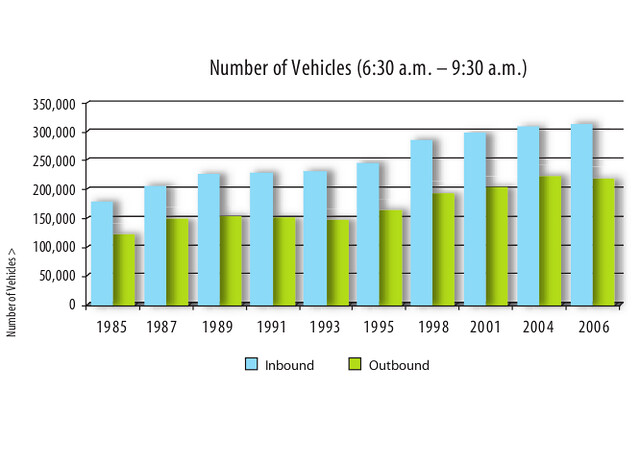 And instead of 2 out of 3 trips being by public transit, 2 out of 3 trips is by single occupant vehicle! So not only have the vehicles increased, a lot of that increase was with a very inefficient means of transportation. 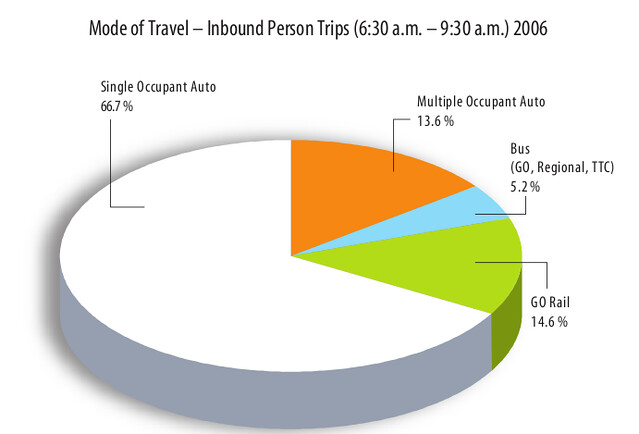 ©Mode of travel at Toronto's border (cordon)
11 years ago ago by IBikeTO.
Travel mode into and out of Toronto.

This sense of crisis that the mayor gabs on about is perhaps understandable now. Unfortunately we now have suburban politicians ready to "solve" both downtown and suburban traffic congestion by attempting to add more road capacity. If history is any measure their attempts will prove to be doomed. The vast majority of Toronto roads with traffic congestion don't have bike lanes or streetcars. There is just no money for building more freeways and the private sector won't pay for any gigantic tunneling action that Doug Ford is hoping for. And, finally, adding road capacity doesn't actually help at all. The road quickly fills up with the latent demand - people just find reasons to make more trips by car. Most recently it was confirmed a "fundamental law of traffic congestion" in a study by University of Toronto professors:

This law finds that people drive more when the stock of roads in their city increases, commercial driving and trucking increase with a city’s stock of roads and people migrate to cities which are relatively well provided with roads. The study finds evidence that this law may extend beyond interstate highways to a broad class of major urban roads, that is, a “fundamental law of road congestion”.

The 2006 City of Toronto Cordon Count Program didn't count cycling and pedestrian trips in and out of the cordons. So last fall Transportation Services conducted the first cordon bicycle count for the Central Area. They found 19,000 cyclists in-bound from 7am to 7pm. Given that neighbourhoods in the Central Area and directly to the east and west have bike commuter mode shares in the range of 5 to 20%, it's not surprising to find there are many cyclists going into and out of the Central Area. Cycling has grown in popularity in Toronto despite the crappy infrastructure. I've found it a strange phenomenon. Perhaps there are just enough half-decent bike lanes so as to entice people onto their bikes. And it doesn't hurt that gas has become expensive and that travelling by car or transit in downtown Toronto is miserable.

If we want to shift more of the travel mode into the Central Area we can't just shift people to bikes, but according to the law of traffic congestion we may actually need to shrink the road capacity and put a price on the privilege of driving your private automobile in Toronto. All solutions to which Rob Ford is ideologically opposed. Good luck Toronto.

Regardless, this demonstrates an ever increasing demand on downtown infrastructure. Destination is irrelevant. There isn't a single thing you can do to alleviate this type of growth. Downtown only has so much space. Half a million cars in 3 hours on a normal day and growing has to take up space, and eventually will demonstrate gridlock. We passed that point a long time ago. Reliance upon the DVP and the Gardner, a collection of 6 lanes, is just ludicrous. For the life of me, I can't figure out why people seem to think there's a magic bullet to solving traffic in a city of six million people. Other cities get it, but we still see guys like Ford apply sub-urban dead thinking to downtown's problems. It's just plain sad.

Adding 1 mile of one lane

Adding 1 mile of one lane road in the city centre isn't going to fix anything.

This is simple political posturing that relies on the misinformation about our transportation problems and ultimately that cars hold the potential to make everything right.

I hope that the Councillors that support this motion will look like fools in the public eye.

Hey that's a very helpful post, thanks so much!

While traffic in the downtown

While traffic in the downtown core may not have increased, all that means is that it must have been gridlock in rush hours for years.

Since last September I've been working at Queen and Yonge (or more accurately riding to/from Victoria and Richmond). If I get in before 8 am and leave before 4:30 pm, it's not too bad. But if I leave after 5 pm, then I face traffic jams in all the routes that I can use to get generally over to the westbound waterfront: Richmond, King, Yonge, Bay, University, Front, Bathurst, Queen's Quay.

I don't really enjoy riding between rows of stopped cars, but that's what most cyclists wind up doing. The sidewalks are no place to bicycle on (though some try).

As for Queen's Quay, I can't wait for the reconstruction. Stopping for a red light at every condo driveway, then trying to squeeze between gridlocked cars, what fun.