Where's the accountability for drivers killing cyclists and pedestrians? 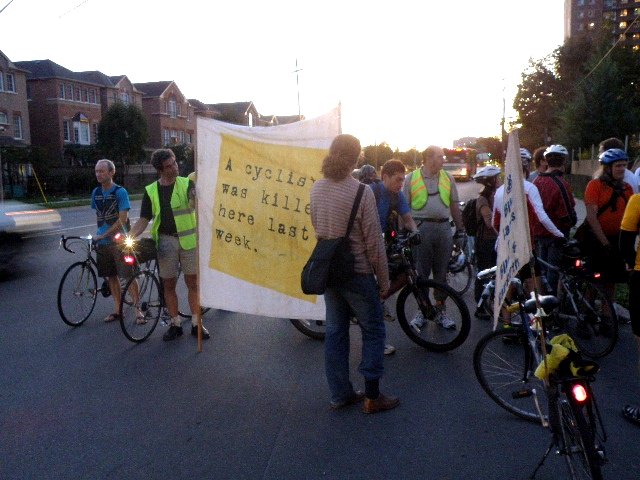 Last Friday an 84-year old man on bike was killed on Greenwood Avenue. Most media reported only a terse report, likely simply gleaned from a police report, suggesting the cyclist "collided" with the car. The difference between this collision and the collision last month between a pedestrian and a cyclist is striking. The media was outraged, the politicians were calling for bike licensing. In that case the cyclist was fined but police found there was no criminal intent (just as in similar cases involving drivers killing pedestrians).

Well, almost nothing. Today Inside Toronto reported that a few things about Jack Roper. We know he was a World Ward Two veteran; he worked as a mailman; he complained about traffic problems in East York; that Jack and friends would meet every morning at Karma Kafe on Coxwell; that he refused to wear a helmet (though a friend admitted "I don't know if it would've helped him..."); and that he was in excellent shape by cycling every day and working out at the gym.

We also know that police had recently given out 303 tickets to cyclists in the hopes reducing "the number of collisions in the area". The article doesn't mention how many drivers were fined, nor how giving out tickets for missing bells or lights would have helped prevent this particular death.

Why isn't the media outraged at the driver? Is this just a case of "shit happens"?

Why is it when once every two years a cyclist is involved in an incident with a pedestrian that so many people have solutions looking for a problem (as in the case of licensing), but no one considers that there may be solutions to prevent 84-year olds from being hit or run over by cars? There is certainly a bias that normalizes death by car as just part of a modern society, but perhaps we also can't apply simplistic solutions like licensing to drivers because in theory the driver already has a licensing. I'm waiting for us to start waking up to the fact that we need to slow down cars, stop considering speeding cars as danger-free, and stop treating death by car as normal. And the best way we know of increasing safety on our streets is to make it harder for vehicles to speed (call it "complete streets" or whatever).

On Friday, August 12 there will be a memorial ride for the cyclist. People will be meeting at Bloor and Spadina at 8am.

I may not have been through

I may not have been through that intersection since the 1980s, but google street view shows that it's a four-way stop with flashing red light.

Nicely put. You put in words

Nicely put. You put in words what had been bothering me about the reporting and commenting on various bicycle-motor vehicle-pedestrian conflicts.

As far as the helmet, one news report had the cyclist trapped under the car, so I don't imagine the helmet was an issue.

Look, it's simple: they don't

Look, it's simple: they don't want us to ride. When we ride and are killed, they don't feel sympathy, because we're not supposed to ride. If this is subconscious, it's not too far below the surface.

Frankly they don't want us on transit, or in their way in cars. They want roads free of 'obstruction', like in the car commercials.

To be fair, we don't know

To be fair, we don't know anything about how the collision happened: who got to the intersection first, who stopped or didn't stop, who had the right of way ... there's nothing to be outraged about (yet). Sad, yes - outraged, no.

I was in a restaurant

I was in a restaurant yesterday and had the misfortune to have a large television showing an episode of 'motoringtv'. There, Jim Kenzie, auto reviewer for the Toronto Star, was doing a full-blown rant about Toronto cycling and the threat we pose to ourselves by trying to share the road with cars. Expanded his rant on the installation and subsequent removal of the Jarvis bike lanes.

His argument is the same as many: we just don't belong on the roads. Until we win that, the press won't care, because it will always be our own fault for being there.

Even though many of us are

Even though many of us are lucky to be near-core where it's far easiier to bike and transit and live somewhat greener, overall, the pollutocratic press is carrupt; it's obvious in the ads! and we won't tend to see relative "truth", even in the more "progressive" places/outlets.

That's why blogging/net/websites are helpful - thanks to those who hold forth and/or help them.

And yes, to be fair, we don't really know what happened, apart from a cyclist being dead. I know I can make mistakes, and some mistakes on the road can only take a half-second.

I've ridden through the

I've ridden through the intersection many many times, as I grew up in the area, and my parents still live nearby.

Even though it is a residential side street, there is a ridiculous amount of traffic. Directly north is the DVP off ramp onto Don Mills. This is the main access residents of East York have to any highway. The next closest on-ramps are Bloor or Eglinton, which are both very far away. So every time there is a southbound green light at Don Mills and O'Connor, upto a dozen cars turn left onto O'Connor and then quickly right right to go south on Greenwood.

The four way intersection at Plains road is the first Stop sign this group of cars encounters. I have always observed, and this statement is by no means scientific, that when there is a line of cars at a stop sign, the first one or maybe 2 will stop "quasi" legally, but the further down the line you go, the less the stop sign is treated properly. I think drivers just get into a rhythm, of GAS-BREAK, while in the line up, and just keep that going until they are through the intersection. This is especially true because there is so little traffic on Plains road, and its rare drivers actually have to relinquish their right of way at the intersection. The result is drivers end up treating the stop sign more like traffic calming infrastructure than as a proper intersection.

The way to prevent future accidents like this occurring to make turning right onto Greenwood illegal and force all that traffic down more arterial roads such as Donlands or Coxwell.

The worst thing about Jim

The worst thing about Jim Kenzie's opposition to cycling is that it's based on a kind of fake concern: he's 'worried' that it's not safe enough for us, so the best thing is if we're removed altogether. Also, sometimes the weather is bad,it seems.

Drivers apparently can pass parked cars just fine, but passing a cyclist requires driving in a huge arc and crossing the centre line.

He also displays the classic bike-hater paradox of arguing that there are too many of us on the road (encouraged by bike lanes, of course), which makes things difficult for the poor drivers, but at the same time there are too few cyclists to justify bike infrastructure.

I can't believe it's Jack. We

I can't believe it's Jack. We met last summer when my young daughter and I would ride our tandem to the Karma Cafe early in the morning before her daycamp. He was keen on life, loved cycling and full of stories as the Inside Toronto article relates - a great bundle of larger-than-life energy and optimism. His family must be heartbroken. I'll be crying on my ride home today too.

Here is my report on this morning's memorial ride.

I live nearby this

I live nearby this intersection - there is a lot of traffic on Greenwood, and in recent years it was changed from a 2 way stop to a 4 way stop

The force of the collision leaves me convinced that one or both failed to stop.

Most likely one of them

Most likely one of them didn't stop and in any other form of accident we would know by now. If a pedestrian or a motorist was killed a statement would have been issued by the Police on the issue. Sgt. Tim Burrows would be on City Pulse giving the offical police report. Only when it is a cyclist does this not occur. I am even surprised the name of the deeased was released . That doesn't seem to happen very often either.