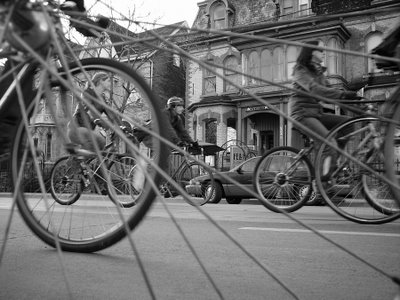 The guests on the program will be Councillor Adrian Heaps, Ward 35 Scarborough Southwest, and Ron Fletcher, the President of the Toronto Bicycling Network.

This is a phone in show so you can call in to ask the guests about plans to get the Toronto Bike Plan back on track.

This will be the first chance to hear what Councillor Heaps' plans are to make cycling issues a priority City Hall. It should be an interesting show.

Thanks to Martin Koob at biketoronto.ca for the tip.

For those of us without cable, we just need to convince some sports bars to tune into this instead of NHL or NBA games. :-)

Anyone catch this last night?

Any suggestion as to where could we recatch this show?