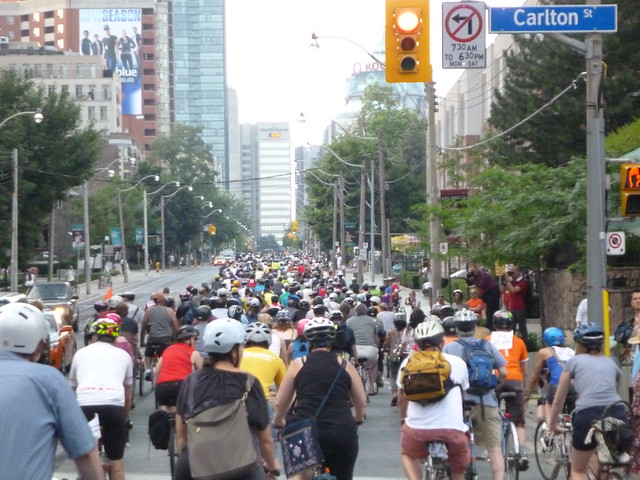 The Toronto Cyclists Union yesterday threw down a legal opinion (drafted by Iler Campbell LLP) at the City, making the claim that City Council's vote to remove the Jarvis bike lanes and install a 5th lane requires a full Schedule C Environmental Assessment. If the City doesn't respond within 10 days they will approach the provincial Ministry of Environment.

Commissioned by the Cyclists Union, Iler Campbell LLP’s opinion contends that bike lane decommissioning and a reversible centre-lane addition on Jarvis Street is subject to a minimum of a Schedule B project screening—that is, screening for projects that “have the potential for some adverse environmental effects.” However, the firm recommends that a more intensive Schedule C assessment (for projects that “may have significant environmental effects”) be undertaken.

Installing the 5th reversible lane (as it was before the original environmental assessment was done) would go against the Official Plan and provincial guidelines that recommend improving streets for active transportation. It would inhibit active transportation and encourage more air pollution and worse health. It is hoped that the City and/or the province will agree it requires a Schedule C Environmental Assessment because of these potential adverse effects so the public can be properly consulted.

Warning. The chair of the

Warning. The chair of the works department is Councillor Denzil Minnan-Wong. His department controls the roads, signs, and other such infrastructure which includes bicycle lanes.

I don't think a group that

I don't think a group that has a full-time advocate needs that pointed out.

The focus on Minnan Wong is

The focus on Minnan Wong is interesting.
Our new "Mayor" Karen Stintz and councillor John Parker both oppose the Jarvis bicycle lanes.
The local ward councillor Councillor Wong Tam's support for the Jarvis lanes has been lukewarm.
The requirement for an environmental assessment will be decided by the McGuinty Liberal government, . not City council.
George Smitherman one of the most important Liberal former cabinet ministers in the McGuinty government ,when he was running for Mayor , was opposed to the Jarvis bicycle lanes as was the candidate for local councillor he supported, Ken Chan.
The Jarvis lanes have bigger problems than the opposition of Minnan Wong and the focus on him distracts from the bigger issues.

The Jarvis bike lanes are a

The Jarvis bike lanes are a polarizing scapegoat. Added to the plan after Council voted to remove the 5th lane, everybody (especially politicos & the media) seems to think that Bike Lanes were the cause of all this. The twisting of this story has been the real culprit as far as I'm concerned. People remain convinced that Bike Lanes are to blame for the removal of a car lane - and that has turned the debate hostile. Who can set the record straight?

I have two comments here. I

I have two comments here.

I have some concerns about deploying environmental assessments as a political instrument. In San Francisco, one person managed to block the implementation of a whole bicycle plan that way.

Reading what Seymore Bikes wrote, it strikes me again that the issue of Jarvis Street, which goes beyond bike lanes, speaks to the contradiction at the heart of car culture. On one hand, drivers make an extremely aggressive demand for space. To quote one YouTube yahoo: "get out of my way or get run down". On the other hand, when it comes to the streets they live on, where their children play, drivers get very defensive, demanding, or at least accepting, traffic calming measures galore. By my reckoning, half the traffic signs in this city convey a variant of the message: keep your car out of my neighbourhood. The controversy over Jarvis Street involves bikes only peripherally; at its heart, the battle over Jarvis Street involves a damnd to remove traffic calming from people who militantly (ever try driving on Merton St.?) traffic calm their own neighbourhood.

While I understand the impulse to save the Jarvis St. lanes if at all possible, I think that in the long run we have to analyze the real problems and contradictions in the car culture and present them effectively and relentlessly.

So sad to see a city go

So sad to see a city go backwards like this. Hopefully the bike lane will be saved.

You mean Front St isn't also a street that will be used by thousands of other people every day who have no interest in Union Station and merely want to get from University to Bay or vice versa?

That would be a sad day when

That would be a sad day when that happens. Cycling is a great way to stay healthy and keep our carbon footprint minimal. Demolishing bike corridors in favour of lanes for more pollution-bringing cars is not a good idea at all in my humble opinion.