Still some hope to save Jarvis bike lanes 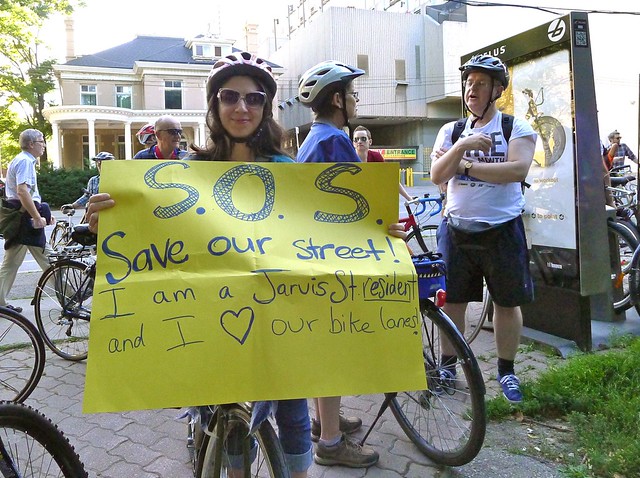 ©View on Flickr
9 years ago ago by Martin Reis.

There is still a chance that the Jarvis bike lanes will be given a reprieve at the upcoming City Council meeting. Councillor who want to keep the lanes will work some procedural magic to get a vote on the agenda.

There are number of reasons to keep the Jarvis bike lanes. Dave Meslin in the Sunday Star listed eight of them. For me, the main reason to keep the lanes is that they reduce collisions. Overall collisions dropped by 23 percent and, amazingly pedestrian-motor vehicle collisions (where a car hits a pedestrian, not vice-versa) dropped by 89 percent. (This might be the first time that the City has produced clear results of the before-after collision rate of bike lanes.)

The only reason given for keeping the lanes by Councillor Minnan-Wong, is that they will increase the throughput of motorists. The bike lanes had minimal impact on driving time, which makes sense since both the top and the bottom of Jarvis act as bottlenecks for drivers, squeezing them through a smaller space.

Cycle Toronto is asking people to call or email their Councillor to get their support in saving them. You can find your ward here and then email your Councillor here.

Putting bike lanes on Jarvis seemed so sensible at the time - a couple of lines of paint tacked onto a project that was already studied, assessed and approved.

It has received a lot of attention, with very little in the way of facts, and the media and politicians have twisted and reduced the discussion to further their own interests (the Star's drama-series "The War on the Car" or Rocco Rossi with his can of black paint, etc...).

But now, like a subway in Scarborough, the discussion may elevate, so that Jarvis too may be addressed in a serious and reasonable manner. Maybe a new traffic count, or collision study, or public consultation, or having it on the agenda at PWIC. Anything would be better than spending a quarter mill. on political perversion, because that is exactly what this is, and nothing more; unless you think there are forces acting to diminish the quality of life of the people who live along Jarvis (although there are).

Losing Jarvis would not be a huge set back, but it would be a fantastic example of wasteful spending at the hands of meddling politicians. In that sense, replacing the fifth lane is actual "gravy".

So did they bring it up at

So did they bring it up at council? I'm guessing not.

Pearls before swine my

Pearls before swine my friends. They don't call it hog city for nothing.