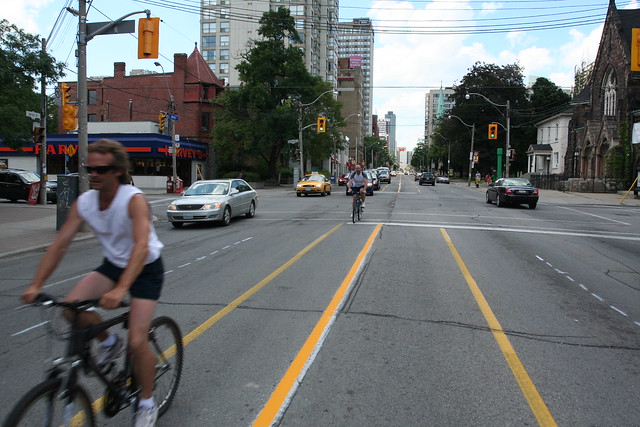 The new bike lanes were just installed this last weekend. The photo above is of pre-bike lane Jarvis Street as taken by Yvonne Bambrick (just before she got two tickets for riding down the centre and taking photos). Luckily, riding in the actual bike lanes, as of today, will not get you a ticket. Photos and analysis to come soon. For now, some tidbits of the no-man's land of Jarvis Street in transition:

The Jarvis lanes represent a symbolic victory for cycling advocates who have lobbied for a more integrated cycling network, and safer conditions for bike users. But it’s been a polarizing issue, too, that triggered heavy opposition from critics who envisioned traffic chaos.

Mayoral candidate Rocco Rossi has made it a cornerstone of his campaign, vowing this week to “paint over” the Jarvis lanes if he is elected. He believes lanes are meant for secondary streets, like the ones on neighbouring Sherbourne Street that, he points out, could use some attention.

The lanes on Jarvis will link up to routes on Wellesley and Gerrard streets and get very close to Shuter Street, says Daniel Egan, manager of pedestrian and cycling infrastructure at the City of Toronto. He disputes suggestions that they go nowhere.

“Everyone says that about every bike lane,” said Mr. Egan. “The reality is to build a network you have to do it piece by piece and it always has to end somewhere.” Mr. Egan said the bike plan is “all about encouraging cycling and making it safer, which go hand in hand.”

In fact, the lanes were borne out of a project that was about restoring the heritage on Jarvis to its days as a grand boulevard. In the end, council voted to use the space it was taking away from motorists for cycling, not widening the sidewalks, although Mr. Egan said the streetscape will receive some TLC eventually.

The head of the Toronto Cyclists Union got two tickets for riding down the now-closed middle of Jarvis St. Wednesday.

Yvonne Bambrick’s tickets come just days after the reversible lane down Jarvis St. was removed by City of Toronto staff to make way for bike lanes.

The bike lanes have yet to be installed and in the meantime cyclists have been a common sight riding down the middle of the road between the four lanes of north-south traffic.

Because of the confusion among cyclists about where to ride and where they shouldn’t ride, Bambrick told the Sun she was trying to take pictures from her bike of the street.

She said she was going to post the photos of how not to ride on Jarvis St. online, all “in the pursuit of public education.”

A Toronto Police officer in an unmarked cruiser pulled up while she was in the “no man’s land” on Jarvis St.

“I was trying to do the right thing,” a disappointed Bambrick said Wednesday. “It’s unfortunate I got a ticket for doing that.”

Bambrick got two $110 tickets — one under the Highway Traffic Act for failing to drive in a marked lane and one under the municipal code for not keeping both hands on her handlebars.