I finally got around last night to biking down Dufferin and through the new Dufferin tunnel that eliminated the annoying jog along Gladstone. Not many positive things can be said about biking down Dufferin as a I rode my bike over potholes, beside high speed urban traffic on a badly lit road. The new tunnel offers a few seconds of bright, smooth peace and then spit me out into the edge of Parkdale. The tunnel just happens to be the only bike lane on Dufferin and in a wide area around it (you have to go to the Queensway or the Waterfront to find the others). This will improve slightly whenever the city gets around to installing the paint it had approved almost two years ago for the West End (mostly for sharrows and some signed routes).

Most media has focused on the better access for cars, but one can't deny that it makes things much better for transit (is there a possible Dufferin streetcar in the distant future?), pedestrians and cyclists. Now if they can just improve conditions for cyclists north and south of the tunnel so more cyclists will choose this route. 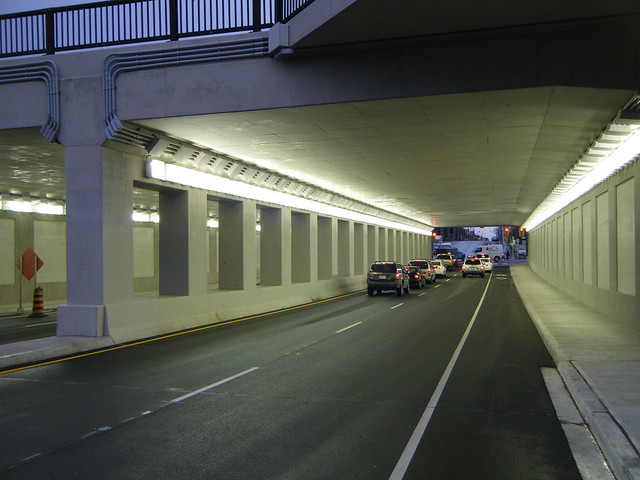 Going to be taking this home tonight. I've been looking forward to the completion of this for a long time. Working at King and Dufferin, I have had to go under a scary underpass or go out of my way by several large blocks to go over a level crossing.

Speaking of transit, I could have sworn I saw street car underpinnings being installed while this thing was being built. I was shocked to see no street car tracks when it opened.

The only bike lane on Dufferin *in Toronto*

There's actually a pretty nice one installed that goes from Dufferin and Steeles all the way up to the 407. I rode it this summer and it is much needed. I wish they'd extend it down to at least Finch.

A Dufferin Streetcar is

A Dufferin Streetcar is definitely an attractive idea. But I think a large portion of Dufferin passengers are coming from North of Bloor, so a streetcar would force a transfer. Unless we include a Transit City line for Dufferin?

The new underpass was indeed

The new underpass was indeed built to potentially support streetcar tracks in the future. The concrete base of the road is lower in the inner lanes, so tracks could be installed by just excavating the fill and asphalt on top. While there are currently no plans for tracks on Dufferin north of Queen, it could happen one day.

Was there on opening day

Who was the first bicyclist through there?

Old bridges like the CN Rail bridge on Millwood leave no room for Bike Lanes - so it is great to see new infrastructure like Dufferin & Simcoe which have been designed with this in mind.

I'm trying to imagine the next bridge re-build on a 401 underpass like Bathurst, Bayview & Yonge.

Once again, the disparity between one new bit of disconnected bike lanes and other areas/routes is really black and white. Smooth pavement, bright lights, and then it ends, and today it was on the blocked side mid-day.
And does anyone else wonder why we can get $42,000,000 for this project and yet we cannot seem to manage a quality pavement repair for cyclists on an approved-for-bike-lane bit of Lansdowne under the same railtracks bridge north of Wright? Or the shitty dangerous conditions in the Bloor underpasses?
And I'm curious as to why there are vertical cracks in the east side concrete walls already...
The City HAS!! to fix up the two problems noted above before the snow really flies.

I disagree. There is too much

I disagree. There is too much working against our roads to keep all of the less busy routes in good repair:
1. Living in Canada means that the roads will get heaved into distress every winter.
2. Nobody wants to pay to run the city properly.
3. Utilities are given cart blanche to wreck roads at their whim.
4. All the heavy traffic isn't helping.

Some links are more critical

Some links are more critical than others - I'm not unreasonable in both expectations and vexes. Bloor St. W. is a critical link east-west under those underpasses, and the bit of Lansdowne north of Wright is supposed to get a bike lane, but it's shit.
And as to the money, why some things get funded and others don't? and one example is how the curb lanes of Harbord St. were repaved this past summer though they weren't needing it, not compared to lots of other places, even Dewson.
The utility cuts are finally under better management it seems from a late initiative of last Council.
And yes, the heavy traffic isn't helping - all the more reason to keep that car registration tax as it's not the bicycles that are wearing and tearing out the roads.

the car registration "pothole tax" is being used for other things not potholes! The Dufferin underpass is likened to the new underpass on SImcoe Street south of Front!