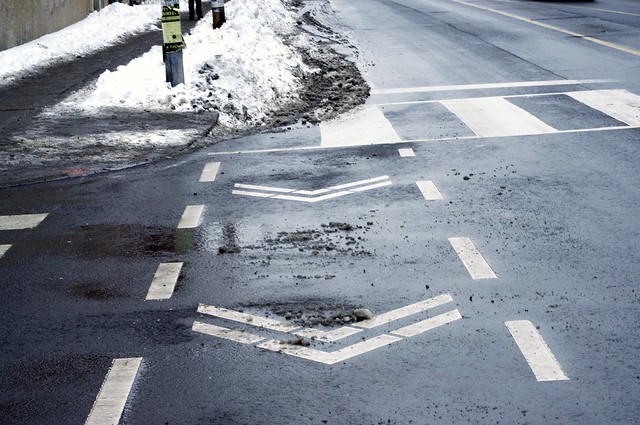 The before photo at Manning and Harbord by Tino. Note how the car lanes are quite clear. 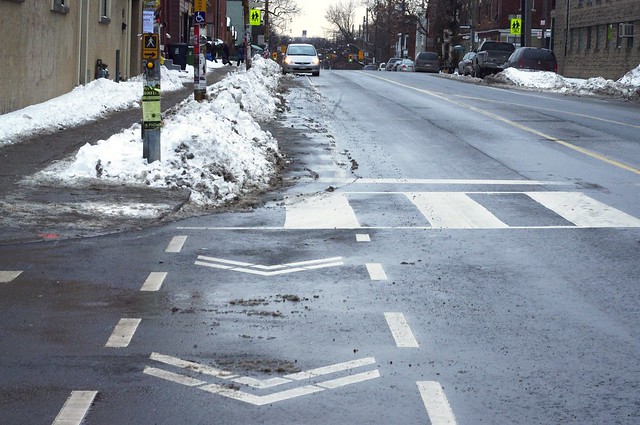 After the cyclists have gone in and shoveled it themselves.

Local thorn-in-officials'-side Hamish wrote the city back in January to let them know their poor plowing was leaving cyclists in danger. Rob Burlie, Manager of Road Operations wrote back:

Hamish: we have had salting, ploughing and snow removal crews engaged continuously in the unforseen 14cm snow event since 11:30pm on Friday, January 7th with the snow ending at 11am on Saturday, January 8th. Our level of service for bike lanes is to maintain a 1 metre clear width within 24 to 48 hours after the completion of the snow event. Crews have been actively engaged in bike lane clearing to meet this level of service since 4pm on Saturday, January 8th and we will be finished at the end of this evening's rush hour as parked cars are hampering operations. With the amounts of snow that have fallen back to back, staff are now engaged in priority snow removal with an emphasis on bike lanes on bridges and adjacent to the lane hatchings ie. Dundas east where the snow is being continually dragged out by parked cars and hope to be complete by end of day Wednesday. I have forwarded your list of observed deficiencies to my staff to review and take any necessary action. Thank you.

I wonder if their car lane of level of service is as delayed? I doubt it.

I do appreciate that there was more snow than anticipated, and that efforts are being made, and late at night efforts and early in the morning efforts, and in between efforts too. And thanks for those efforts, and to all of those who are doing them.

It's just in having bike lanes, and not somehow managing to keep them as a functional network, despite European centres and likely other winter cities in North Americar doing so, it does seem inadequate, if not entrapment, given that the carcooned have a higher degree of safety than the two-wheeled, and it doesn't take much to deflect a wheel at this time. Could the plows on their first run where there are bike lanes, somehow manage to at least clear .4M into them so at least we have a bit of space? The remnant snow on the roads where cars travel is likely dispelled pretty quickly through the action of the wider car wheels and as friction = heat, and cars are mobile furnaces ie. better means of heating than of mobility, they could perform public service and less private service perhaps without any real increase in risk, and decreasing speeds may make things safer in a winter event.

I'm sure you'd like to have more of Buffalo's approach to snow clearance and cars perhaps. I've heard they really are pretty hard on the storing of private vehicles on public space in their snow events.

You think it's bad there...

I just walked through 500m of ankle-deep snow on a highway over-pass(i couldn't even locate the sidewalk)... i finally gave up and risked my neck in 80km/h limit traffic carterial.

FYI, the stunning contrast between the sidewalk's overpass, the sidewalk leading up to the over-pass and the bone-dry road nearby was particularly striking. Lots of foot-traffic on the overpass also, lest you think nobody needs to walk across highways.

I don't know which suburbanite gets their walk plowed, the program i've heard of is only for disabled people.

You're right also, every bike lane i've been to the plow driver doesn't clear the corner... that is life it seems... swerving out into traffic at every intersection - bike lanes done wrong are pretty dangerous.

IIRC, the city works dept has a few machine to "eat" those snow-banks.. where the hell is it? It has been far too long for them to simply take the machine and run it up and down roads with cycle lanes! Probably sitting in a garage rusting!

If your bike lane is coming

If your bike lane is coming and going like that, "swerving out into traffic at every intersection" probably isn't your best plan. Stay left of the whole mess, in the "car" lane. It is more safe.

...the city works dept has a

> ...the city works dept has a few machine to "eat" those snow-banks.. where the hell is it?

The snow melting machines you elude to are not often used. They require quite a lot fuel to warm and melt the snow; Therefore, they are very expensive to operate. They are only pulled out when there are significant snow accumulations, and when snow REMOVAL is is required. Trucking the snow away with dump trucks is actually cheaper and faster. These machines are more often used in parking lots where the snow is brought to them rather than actually operate on the streets, like they used to be.

I am an avid commuting

I am an avid commuting cyclist who supports bike lanes where they make sense and the use of bicycles for transportation always. That said, I just can't see getting all crabby about uncleared bike lanes. I would rather see properly cleared sidewalks for strollers and wheelchairs (not bikes!) long before cleared bike lanes... I mean, look at those pictures. Seems to me the sidewalk should be the priority. No bike lane available just means you take as much of the "car" lane as you need to be safe. No big deal.

Sometimes, things are really bad and full-up and dangerous like the pictures above, thanks for the fix-up biketypes

But the City's also been doing better in some ways with the indented parking bays, with the bike lanes in places, and yes, they've removed snowbanks on both the Viaduct and the Dundas St. W. bridges with their bike lanes.

They haven't made enough changes though to have a consistent, good winter biking network, and this snow clearance issue is a bigger question with the proposed separated bike lanes. Will the City be able to actually clear them out?

Safe trips; and the good news is there's more light in our days!

Check out how it's done in

Check out how it's done in Copenhagen's separated bike lanes in the video here - http://www.copenhagenize.com/2010/12/ultimate-bike-lane-snow-clearance.html

...snow clearance issue is a

...snow clearance issue is a bigger question with the proposed separated bike lanes. Will the City be able to actually clear them out?

Good point!
As a parallel, here's the pedestrian situation in the burbs' residential streets: for several days after a snowfall, people are safer to walk on the road surface rather than the sidewalks. Even if the sidewalks are not snow covered, many places have large icy sections from melting snow and thus are quite treacherous. Most people walking to work stay off the sidewalks if they can help it.

It might be smart if the City gathered experience as to what bike path designs will be safe in the winter before they commit themselves to a specific design.

Snow on Wednesday - Viaduct cleared mid-day Friday. Not bad, but it could be better. especially the practice of plowing snow curbside to the all accommodating bike lane.

Snow clearance does remain an

Snow clearance does remain an issue, though there are some good efforts, but we don't have a consistent width in bike lanes, nor on other facilities, so sometimes it's a bike line, ie. white line and white finger riding, or taking the lane.

Parts of Harbord are excellent, but other parts remain lousy, and part of it is the individuals and at least a couple of car businesses on northside Harbord near Crawford-ish/360 that push their snow into the bike lane.

But on Thursday night, the point of this comment, I saw some very strange actions on the part of a city works crew - clearing away the snow from a new waste bin on the curbside of the bin on Bayt @ Grosvenor. This made no sense whatsoever - there's no ads on these new bins; older bins had ads that maybe there was a contract that they had to be cleared for the revenue.

So if anyone wants to find out more details please go ahead.

There's a standard procedure for clearing lanes of streets when cars make it impossible: put signs stating "no parking - snow removal at x time" and tow away any cars that don't comply.

They don't have machines to

They don't have machines to "eat" snow up and blow it into dump-trucks?

machines to "eat" snow up and

> machines to "eat" snow up and blow it into dump-trucks?

Yes, but a similar problem exists with those, and it creates a new problem.

The snow still has to pushed into the middle of the lane, as it also does for the snow melting machine. This is because these machines cannot "eat" the snow which is on the sidewalk or too close to the curb. Instead of merely pushing the snow, lifting the snow to a dump truck is almost as fast.

Next, the machine you're talking about is essentially an " extra-tall" snow blower, and the road needs to be wide enough to have the dump truck next to it, which precludes this from being used on roads that only have two lanes of traffic in one direction, or else you have to stop traffic during the snow removal operations.

Lastly, in order to perform this kind of snow removal, all parked cars must be removed form the street which, again, adds to the costs.

The other thing that is sad,

The other thing that is sad, how much snow have we actually received?? It's not like they're swamped for weeks or the budget will be ruined by cleaning out some bike-lanes.

The metromelters are astronomically wasteful in energy terms, but they do help.

What also would help is to have the smaller sidewalk plows come along and tidy up the bike lanes during snowfalls and days afterwards. They are wasted on many sidewalks really, and they're just right for bike lanes in many ways.

There's also a good chance that the money for their operations could be found within the City budget as it seems that there's a program to clear away snow from in Front! of recycling/trash bins, perhaps a holdover from when there were ads on the front of them. This is a complete waste, though I've had a thought maybe it's for the ease of emptying the bins, that thought just arrived.

While climate change will be bringing more extreme events to us, the overall trend will be for winter to wither and ease away, so we must insist upon good snow clearing for us, and to chase down people who mess things up for us like the Harbord St. gas station/car dealer - as one eg. - who've cleared a good amount of their snow into the bike lane, perhaps again.

The City is making some efforts, but we don't need the bike line, but the bike lane, or at least half of it.

Toronto and its many snow

Toronto and its many snow days is different from most European cities and thus may have to find its own solutions.

There is a way to get clear bike ways in winter. Designate some key roads as bicycle-only arteries during the winter months, and then it would be easy and inexpensive to keep those free of snow and ice.