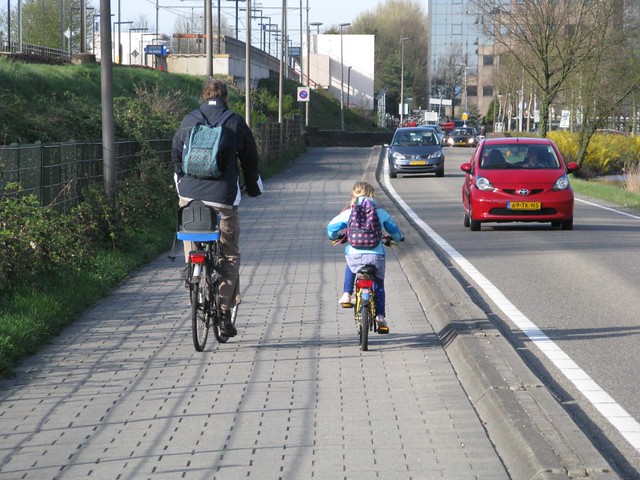 ©Bike path alongside road
10 years ago ago by IBikeTO.

the theme for this year's Complete Streets Forum is “Building Alliances”. The Forum brings together a diverse group of professionals, policy-makers, researchers, advocates, and thought-leaders from across the GTHA and beyond. It will be of particular interest to those in the transportation, public health, urban planning/design, public policy, and non-profit sectors.

It will feature speakers such as Mia Birk of Alta Planning + Design, who contributed greatly towards the current awesome cycling infrastructure in Portland, Oregon (in her former job as staff person at the City of Portland); Eleanor McMahon, Founder of Share the Road Cycling Coalition, and Michel Labrecque, a former city councillor and radio/television commentator, who was involved in the creation of Maison des cyclistes, the Tour de l’Île de Montréal and La Route verte (4000 km of bikeways – the longest cycling route in the Americas) as President of Vélo Québec. Councillor Denzil Minnan-Wong will also speak briefly about what the city is doing and his initiative for the separated bike lane network.

Spacing has an interview with

Spacing has an interview with Nancy Smith Lea, director of TCAT.

Reflecting back on the year that was, “the most important development has been the uptake in the use of the term ‘complete streets’. There has been a rallying around this vision,” she says. It’s a vision that’s hard to disagree with: complete streets are designed to be safe, accessible and inclusive for users of all ages and abilities. All the same, Smith Lea is encouraged by the increased use of the term by advocates, City staff and professionals.

“It has really helped advocates to form a positive vision.” She cites the Open Letter to Candidates about Complete Streets as an example. “It’s too easy to get focused on what is wrong. It’s really helpful to have everyone on the same page in terms of what we want to change and what we want that change to look like.”