BixiTO stations and bike lanes map: navigating your way around Bixi in Toronto

[Update: I've linked below to the casa map, due to popular demand. Thanks Antony]

Some people (particularly those without cellphones) have been asking for a printable map of BixiTO stations. I've cobbled one together - nothing pretty but functional.

Credit goes to Ride the City which is producing a great bike mapping site for a whole slew of cities. And credit to Bixi for publishing their data so other applications can easily be created to show the station locations as well as the activity at those stations. It enables Ride the City to show all the stations and it also allows us to look at cool activity maps like the following shot of Toronto, Saturday, May 7, 2011. Compared to other Bixi locations, Toronto is doing really well, especially given that it's not even a week old: 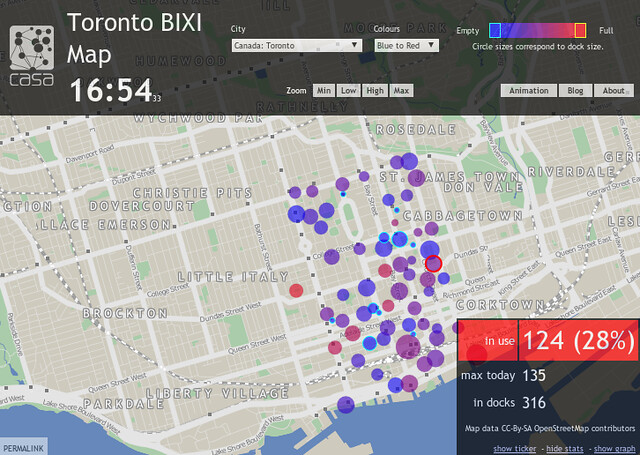 BIXI Toronto site is very clunky. Somehow after much digging around, I found this page, which shows a station map without all the clutter that blocks one's view of the map: https://toronto.bixi.com/stations/

it would be really helpful if

it would be really helpful if you linked to that "CASA" map, instead of just teasing us with the picture...

Agreed, what a tease.

Nothing less than 4m from a curb is safe from a good car-crushing.

Wow, looking at the

Wow, looking at the oobrien.com ticker, Bixi hit 250 bikes in use at the same time! This sunny long-weekend Saturday at 8AM there were 600 bikes in docks, and usage went up all day until at 4 o'clock there were only 350 left!

I have a feeling some folks paid big overtime fees... but totally worth it.