Rev. Anne on her bike on Bloor Street 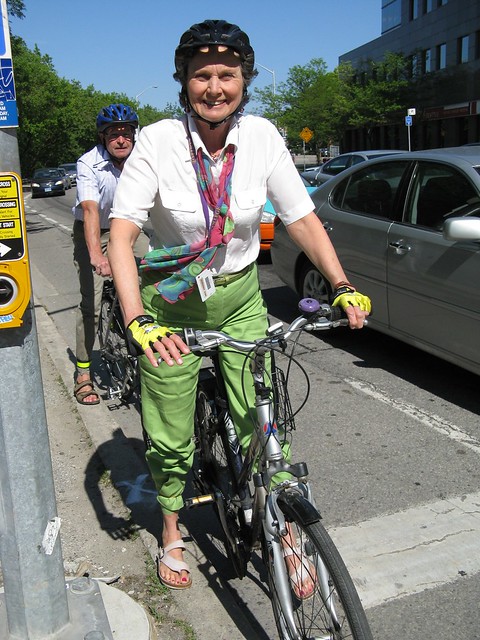 I made a spur of the moment request to snap a photo of Rev. Dr. Anne Simmonds as I was taking photos of the indirect left sign at Sherbourne and Bloor. She said yes, she gave me her card, and I emailed her the photo and some questions. Here's the Q & A:

How long have you biked in Toronto?

Since 1979 when I returned from being out of the city for 7 yrs. It is my main form of transportation in the city, even in the winter when the streets are dry.

What is your usual route?

Several routes downtown - gerrard and bloor are the main streets but I use side streets when I can.

What is your favourite bike route?

For pleasure in the valley.

What has improved, if any, for your cycling route?

Separated bike lanes - in the mean time making it hugely illegal with a big fine if someone blocks the bike lane - including police - they seem to have no awareness of forcing people into traffic.

Is there hope for better cycling and a healthier Toronto? What's the best way we can get it?

I see hope in that there are so many more cyclists so we have to be taken more seriously - when I 'm in a line of cyclists on a busy street, I feel a little safer. Yes, we need to pressure city counsellors to make it more accessible and safe.

You did not ask what makes me crazy about riding in TO - Bloor street - when I go along there and do often - after years of being torn up - a perfect opportunity to include designated bike lanes and we did not even get a solid white line to separate us from the traffic. in some parts it would have been so simple to have separate lanes.

the bicycle is indeed a great

the bicycle is indeed a great piece of transportation equipment and must be reverred by all so as to be safe, also causing less emmissions of fuels would highly benefit this huge city. breathing is essential and is getting more difficult.

Anne's got a blog post on our encounter and adds some more interesting words of wisdom, including this prayer every time she gets on her bike “Keep me safe and sensible.” Truly practical words for anyone on a bike, in a car or on foot:

Herb did not ask why I use my bike as my main form of transportation in the city. Here is why. Firstly, I find it the most efficient way to get around. Take last Friday night: we could have taken the car during rush hour. I expect we might have shaved 5 to 10 minutes off the trip, judging by the traffic. The next day I also rode to the wedding. I have two carriers on the back and my robe garment bag gets wrapped around my briefcase and together they are held across the back by bungee cords.

There is an incredible sense of satisfaction knowing these things: I can more or less predict how long a trip will take; I am getting exercise; I am not contributing to pollution and traffic congestion; and it is much less expensive to run a bike than the car. As I told Herb, I have been riding in the city since I moved back here in 1979. When my daughter was little, she rode in a seat behind me. In the early 80’s, no one, including us, wore helmets. Today I would not go without it.

The roads are much busier; everyone is in more of a hurry. It feels much more dangerous to me now that it did then. I continue to ride because of its advantages. However I do not want to die in a cycling accident. Nor do I want to have permanent injuries – or any for that matter as a result of a mishap. I will spare you the details of the falls I have already had in the past. I am as careful as I can be.

But here is what I want to say to drivers. I know some cyclists take chances. I do not defend them. Sometimes I am one of them. However, I have had cars and trucks pass me so fast and close that I am slightly thrown off balance. It feels that for a moment my heart has literally stopped. A streak of fear has just jolted through me. I am aware of how utterly vulnerable I am, should I be brushed, thrown or hit.

Also terrifying is passing a parked car whose door starts to open. Please take a second, no matter what side is being opened, to look. I have been known to scream “watch it!”

To those who are looking for the courage to get on the bike, I encourage you to start. Use back streets and designated bike lanes to start and don’t be in a hurry. Every time I get on the bike, I try to remember to say this prayer: “Keep me safe and sensible.” I invite other cyclists, maybe even drivers to do the same. And as I write this, I challenge myself and anyone reading this, to offer another: “Help me to slow down and treat all others, drivers, cyclists and pedestrians as I want to be treated myself.”

I received an update from

I received an update from David Dunn of Cycling infrastructure and Programs. The reason for the closing of the P gates is Ontario Place. That portion of the trail goes through their property and Ontario Place is adamant the gates are closed until further notice.

Looking to all this it seems

Looking to all this it seems that cycling is now got too much exposure, I have recently come across with Chicago street building a different lane for cycling, hope we are now moving to our old days again from where we have started.