Don Wesley is the co-captain of the Ward 20 advocacy group of Cycle Toronto (formerly Toronto Cyclists Union). With support of his Ward group and solicitors, Fogler, Rubinoff LLP, he is taking legal steps to ensure that the John Street EA addresses the concerns of cyclists. Local John Street business, the Urbane Cyclist bike shop, is also bringing forward their legal concerns, represented by Ian Flett.

From Wesley's letter, the main objection to the EA:

... the EA proposes to narrow existing vehicular lanes along John Street without provision for bike traffic, thereby effectively eliminating John Street as a cycling route and instead turning the route into a “ride at your own risk” corridor in which cyclist safety will be endangered due to competition for space with automobiles.

Wesley's states that the John Street EA contained two legal deficiencies. One, the EA does not comply with the Municipal Class Environmental Assessment and, two, it is inconsistent with the 2005 Provincial Policy Statement and does not conform with the Growth Plan for the Greater Golden Horseshoe.

Wesley and Urbane Cyclist are requesting a meeting with the Public Consultation Unit of the City of Toronto. In case their issues aren't resolved to their satisfaction, they will request the Minister of the Environment issue a Part II order pursuant to the Environmental Assessment Act. A Part II order allows an interested person to ask for a higher level of assessment for a class environmental assessment (Class EA) project if they feel there are significant outstanding issues that have not been adequately addressed.

Ward 20 cyclists believe that there are ways of achieving the goals of the City on John Street while accommodating cyclists and protecting their safety.

The John Street EA was approved by Council, but there were some flaws in the process that make this legal challenge important. Staff used incorrect numbers for estimating cycling traffic, which they later admitted their data was somewhat flawed after sustained effort by Dave Meslin and other activists in recording actual data with lots of media attention. Instead of the claimed percentage of 2% bike mode share during peak times, Meslin had measured closer to 30%. Though the admission was posted on the site, this information was not available for the public meetings. 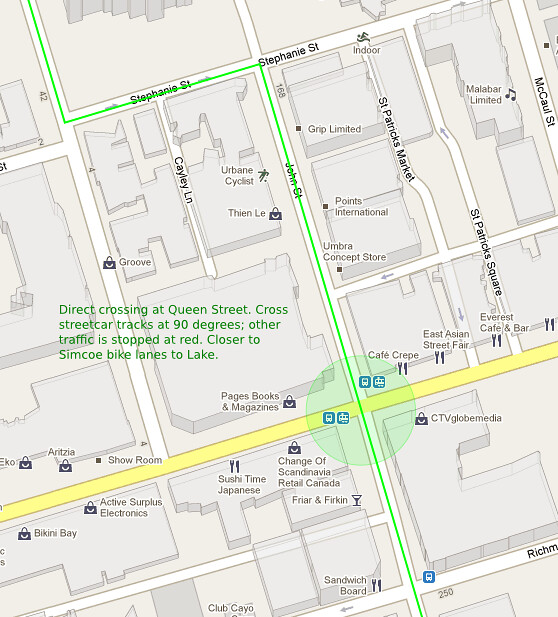 ©John Street at Queen West
10 years ago ago at Fashion District, Toronto, Ontario, Canada by IBikeTO.

Another flaw was in the process of pushing hard for a pedestrianization of John Street without a commitment to ensuring that cyclists would have the same level of access and connectivity on John or close by. Indeed, it now appears as if cyclists may not even get an adequate cycling route on Soho/Peter, and this was the route that was championed by Councillor Vaughan. The major concern was improving the connection across Queen Street since currently it includes an unsafe jog across streetcar tracks and a left turn - something very few cyclists feel comfortable in doing. A new building is being proposed for the corner that would eliminate a chance for a reconfigured intersection.

This makes fighting for a John Street that includes cyclists even that more important.

From what I understand, the

From what I understand, the plan calls for a slow, pedestrianized Shared Space with curbless sidewalks and narrow lanes. I expect the top speed of a car down this street will be about 15 km/hr. The whole thing will basically be a "bike lane," as well as a sidewalk, with cars nudging their way through slowly. John St. will be so safe that children will be able to walk down the middle of the street without worrying about getting hit (click here to see a traffic planner sitting in a chair right in the middle of a similar Shared Space in the Netherlands).

Cyclists will not be able to burn down this street, however, which is why a bike lane is not only unnecessary but inappropriate. This will be a slow street, not just for cars but for bikes as well. Cyclists will be perfectly safe on John, but those seeking a fast, north-south commuter corridor should look elsewhere.

Somewhere out there on the

Somewhere out there on the web is a picture of a bike path in the Netherlands that takes a shortcut through a building. If we can't get that for Queen/Soho/Peter we should at least move the westbound traffic lights to the northeast corner of Queen and Soho.

"those seeking a fast,

"those seeking a fast, north-south commuter corridor should look elsewhere."
Why should they have to?
Cyclists have been using this as a fast safe north south commuter corridor for at least as long as Urbane Cyclist has been there.
Why should commuting cyclists be displaced to inferior, unsafe and less direct routes.
Elsewhere ... Like where?
There is not one other location with a 90 degree crossing of the Queen Street car tracks with a signalised intersection between University and Spadina.
There is no other safe alternative for commuting cyclists between University and Spadina.
The issue of how to cross at Soho and Peter has been on the front burner ever since the John Street plaza was proposed.
What has the City done to advance a safer crossing for cyclists between Soho and Peter Street over the last 3 years?
Nothing.
The John Street Pedestrian Plaza should not proceed until the City has secured and implemented a safe convenient and direct alternative way for commuter cyclists to cross Queen Street West nearby .